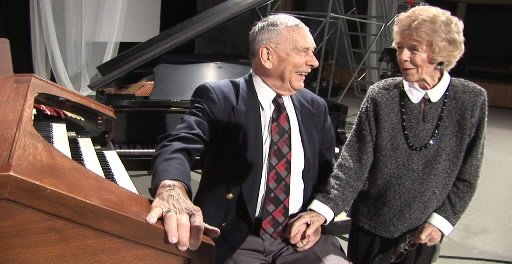 Don Warner, left, and his wife, Ruth, of 70 years are seen near his 40-year-old Conn organ. Warner stars in the weekly “Don Warner at the Organ’ on WGCB in Red Lion, Pa.. Background posts: The organ: ‘It is a whole orchestra in itself’ and Research topic: 18th-century helicopter could have aided pastor.

There’s something about keyboard players that brings recognition.
Everyone, for example, knows Sam Keeney.
And Don Warner.
Maybe it’s because they play so many gigs in such varied places … .

Those are Don Warner’s fingers on the keys.

Warner had appeared on TV for decades. And he played his organ mounted on the back of a vehicle in countless parades.
And his family’s Red Lion dairy (now Lions Pride restaurant) and moving business is synonymous with York County.
So, here’s a look at the man behind the name, as presented in a York Daily Record/Sunday News story (2/12/08): “A history of music:”

Don Warner took his seat at his organ and within seconds brought the quiet room to life.
His animated hands and feet worked the pedals and keys that gave a whimsical, circus-like flavor to the 1950s hit “April in Portugal.”
Warner, 90, is the star of Don Warner at the Organ — a weekly show broadcast on WGCB Red Lion Television which features classics from the 1930s and 1940s.
Warner said the show has aired every week since 1950.
On Monday, he and his wife, Ruth Warner, were at the Windsor Township studio where Don Warner played a few songs on his nearly 40-year-old Conn organ.
The couple — Red Lion Area Senior High School sweethearts who have been married for 70 years — recalled highlights of Don Warner’s musical career.
Trained at the Sherwood Conservatory of Music in Chicago, Don Warner played with some big bands in the 1930s.
He loved playing the music, but disliked the environment which included other band members who abused alcohol and drugs, Don Warner said.
“So . . . I became a milkman,” he said.
Despite joining his father and brothers in the family’s dairy business, Warner said he continued to play the organ for radio and television broadcasts, at church and for community events.
Warner said he has performed with fan dancer Sally Rand at the York Fair.
“She was a very religious lady . . . very famous in her day,” he said.
Don Warner counts Presidents Eisenhower and Ford among his audience members.
For more than seven decades, he has played an organ at Bethany United Methodist Church in Red Lion.
Despite a car accident about four years ago which left the Warners with serious injuries, the couple say they are blessed with family, friends and each other.
“They’re lovely people,” said John Peeling, the station’s general manager. “They’ve been a part of the community since I can remember.”