Does this crypt-like vault under York, Pa., exist today? And where exactly was this catacomb? 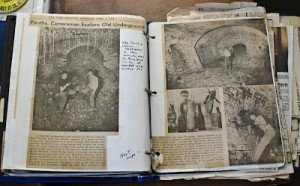 This scrapbook shows a vault under the City of York, Pa., uncovered in York County, in 1968. The newspaper article tells about a crypt-like underground room. ‘The photographs resemble European catacombs, but they were actually taken in the City of York,’ Blake Stough wrote in his preservingyork.com blog, where this photograph and others originally appeared. (Click on the photo to enlarge.) Also of interest: Check out these half dozen posts about Blake Stough and his research and Here’s a mystery now solved: Wandering woman cemetery marker sits in Carlisle.

Terry Brillhart, Ken Koons, or John Kennedy might know what happened to what a York County blogger is calling catacombs.

Preserving York’s Blake Stough recently posted a photograph of a scrapbook along with individual photographs of the three explorers standing in an underground chamber.

The York Dispatch reported on April 4, 1968, that the York Wrecking Company found the forgotten room while razing properties near the 400 block of East Market Street.

The demolition and excavation work was probably linked with construction of Broad Park Manor apartments, East King and Broad streets.

The discussion over at Preserving York is that the chamber was part of a Helb bottling plant.

The question is whether the catacombs exist today. And where exactly was it?

Meanwhile, I know you want to know more about the catacombs including what some of Blake’s readers are saying about them. Well, you’ll just have to check out: ‘What Happened To York’s Underground ‘Catacombs’?

Can you locate this old building?

Does this photo show an old school bus stop shelter?