Linked in/Neat stuff: Klan takes it on the hood/Eastern Yorker scored 66 in a basketball game 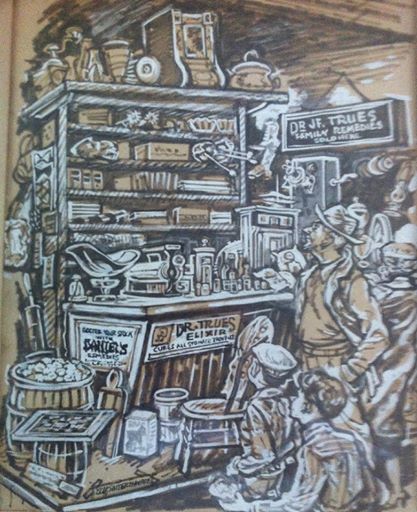 ‘Here’s a “lost Satterthwaite” for your collection,’ ex-Yorker and Florida journalist Gary Dutery wrote on my Facebook page. ‘I wonder if anyone remembers York’s “Colonial Days?” ‘ Gary went on to tell his a story about fellow York, Pa., ex-pat artist Cliff Satterthwaite, now living in Fredericksburg, Va. Also of interest: Check out these Satterthwaite drawings and paintings.

Here’ the rest of Gary’s story:

“In keeping with Jim McClure’s current Cliff Satterthwaite theme, here’s one he sketched it for the Gazette and Daily in the late 1950s. It’s a country store that was, when he drew it, located within feet of the square in the first block of East Market Street. It’s actually a storefront window display created for York’s “Colonial Days” celebration. The folks in the foreground aren’t customers, they’re viewing it from the sidewalk. It was created by my mother and Betty Rosenmiller, who went on to launch the York Hospital Fete. The items came from the former Landis Valley Farm Museum in Lancaster. Cliff gave the original to my mom years later when they were both showing at the York Art Center.”

Too, too much: This Southern Poverty Law Center site locates hate groups around Pennsylvania and the U.S. Pa. just has too many of these terrible guys. York County has too many demonstrations from these groups in our past, but love this moment when the Klan got its comeuppance.
Marian Anderson sings in York: Wonder what this famous singer wore in her 1941 appearance at William Penn High School? See: York accepted what Washington, D.C. rejected.

66 points a record: Throwback Thursday came up with a good one. Eastern York’s Ken Fritchman’s 66 points. in a 1979 game against York Suburban. This is believed to be the record for points scored in area high school basketball game.

History mystery: You can see this castle-like – or is it prison-like – building from Interstate 83. Ever wonder why it was built?   Click on the links to comment or see other comments.