Distelfink? So now we all know the meaning of the strange Pennsylvania Dutch name 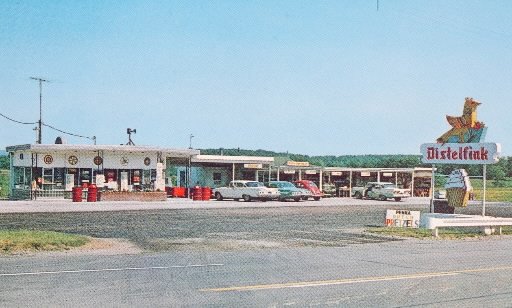 Distelfink Drive-in Restaurant in Adams County was known as Sandoe’s Distelfink Drive-In on this postcard from York, Pa., Daily Record/Sunday News’ files. This picture from the undated postcard shows three cars from the early 1960s and one from the late 1950s. All this raises the question. What is a Distelfink? Also of interest: Decision at Tropical Treat. Fat Boy or Italian steak?

If you ever wondered what a distelfink is, Hanover’s Dick Relac has some clarity, delivered via email:

“I just got around to reading your Sunday column on the Glattfelder/Gladfelter family, and I have a slight “correction” for you. I put the word in quotes because it wasn’t actually your error:

“In the paragraph where you quote an unsourced obituary for Millard Gladfelter, it refers to ‘…a distelfink, a mythical bird symbolic of good luck,…’ Pictures of the bird may symbolize good luck and happiness in Pennsylvania-German folk art (see the Internet), but it’s not mythical at all.

“Distelfink is the German name for what we call the European goldfinch. ‘Distel’ is the German spelling of ‘thistle,’ Fink’ is ‘finch,’ and ‘Distelfink’ (German nouns are all capitalized) would translate roughly to ‘thistle-finch.’ Seeing or hearing one around your house or in your garden was thought to be an omen of good fortune, sort of like our faux-folk references to the ‘Bluebird of happiness.’

“Of course, Distelfink is also the name of a drive-in restaurant on the Old Harrisburg Road north of Gettysburg, where my wife tells me generations of families, hers included, have stopped in the summer time for snacks or hand-dipped ice cream. Most of them probably didn’t know the origin of the name, but as a (now-retired) federal translator and foreign intelligence analyst, I was able to tell her.”

So now we all know what a Distelfink is, thanks to Dick.