Did you know? Turnpike crosses tip of York County. Linked in with neat history stuff, July 31, 2012 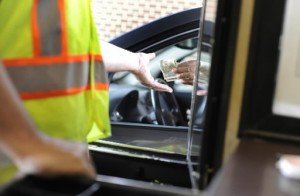 Some people may not realize that York County claims a piece of the Pennsylvania Turnpike. Ydr.com’s Exit Interviews series underscored the superhighway’s presence with a profile of a turnpike toll collector. Exit Interviews found Mike O’Keefe in toll booth No. 8 in Fairview Township, off Exit 39b of Interstate 83. Here is reporter Erin McCracken’s description of the local strech of the turnpike: “Now, the turnpike cuts through northern York County where Fairview Township fades into Cumberland County. It intersects I-83 at the Harrisburg East/West Interchange, which most locals lump with New Cumberland, Camp Hill and Lemoyne.” And here’s a quiz from Erin’s story: What are the dimensions of a toll both at the Harrisburg West interchange? See answer below. Also of interest: No light at the end of this (abandoned) Pennsylvania Turnpike tunnel.

Susquehanna Gateway Heritage Area is monitoring the sale of “historically significant Indian lands” in Lancaster County’s Washington Boro. Those lands are across the Susquehanna River from York County.

Susquehanna Gateway’s message from its newsletter about the land sale by Safe Harbor Water Power Corp. included a reference from the Pennsylvania Historical and Museum Commission about the significance of the Indian land:

“We encourage the Safe Harbor Water Power Corporation to work with conservationists to save this extremely important archaeological site instead of selling the land as residential property,” Susquehanna Gateway’s newsletter states. “And we ask everyone concerned about the potential loss of this history to share this message with others who might be interested in spreading the word. Email, Facebook postings, blog postings, tweets, YouTube, and other social media are especially appreciated. Working together, we hope to convince all parties involved to cooperate to save this extremely important site.”

Media Center: Ydr.com’s new Media Center, laden with photos from across the world can be found here. And here’s the hottest part of that site: The Olympics.

Forum of the day: York High grad Chris Doleman will be inducted into the National Football Hall of Fame next weekend: http://bitly.com/NeSw2L. Where would you rank him among best athletes with York County ties? Please comment below. Here’s one list: Who were the most prominent athletes from York County?

Bookstore closesOn the Road books in Waynesboro, Franklin County, is off the beaten track. And it’s for sale.

Here’s the answer: Toll booth No. 8 at the Harrisburg West interchange is 5-feet by 10-feet.