Did you know this? Six discoveries about York County, Pa. 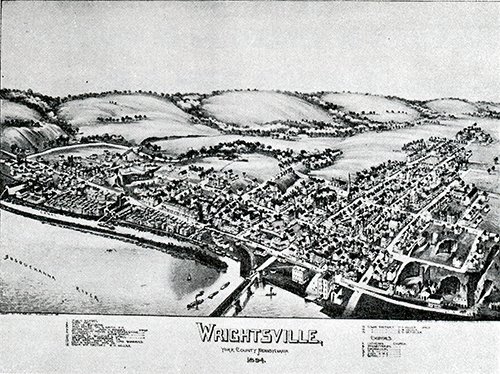 W.S. Nye’s and John G. Redman’s ‘Farthest East’ carried this bird’s eye view of Wrightsville, perhaps from the perspective of Chickies Rock on the Lancaster County side. One hundred years before this image was made, two Hellam/Windsor township families were engaged in a property dispute that involved a Susquehanna River ferry and fishery, among other things. This case, involving Hellam Township land, reached the U.S. Supreme Court: Ewing v. Houston. This little-known case is ripe for further study. Count this as discovery No. 1. Also of interest: York County’s one-room schools a master’s thesis waiting to happen.

One of the fun things about studying York County history is the rush you get when you discover something new.

So I compiled a sampling of discoveries that were new to me. All could be topics of in-depth study. See if they’re new to you, including Ewing v. Houston, above … .

2. This was a recent discovery. The former North Penn Street Bridge was a drawbridge of sorts. It could be raised to let big pieces of equipment – such as from S. Morgan Smith – pass under. It has since been replaced by a pedestrian bridge. Things like this have meaning. This swap of drawbridge for a pedestrian span provides insight about how a service industry is replacing heavy industry as we move deeper into the information age.

4. Did you know that the founder of Reese’s Peanut Butter Cups was born in 1879 in Frosty Hill, near The Brogue in southeastern York County.  According to this website, Harry Burnett Reese lived in York County until the 1920s, when he moved to Hershey, eventually running the H.B. Reese Candy Co. His family sold the company to Hershey Foods after his death in 1956. This is also in the “could have been” category. York County could have been the home of two small candies with giant international reputations – York Peppermint Patties and Reese’s Peanut Butter Cups. Actually, you could add Katharine Beecher Butter Mints to that list too.

5. D. Landreth Seed Company, whose website says it’s the oldest seed house in America, operates in New Freedom. It’s been around since 1784. I explore Landreth a bit in this post. Long and short is that it’s tucked down in New Freedom, and many York countians don’t know about it. George Washington and Thomas Jefferson purchased their seed from Landreth when it operated in its longtime home in Philadelphia.

6. Recognizing our Democratic gubernatorial nominee Tom Wolf, I wondered for many years where the original Wolf of lumber yard famed is buried. Then, I was wandering through the old Lutheran Church Cemetery in Saginaw one day and saw his tombstone. His burial site is obscure for a man whose descendant might serve as Pennsylvania’s governor.

This isn’t necessarily a discovery. It’s more of a wish for discovery.

You’ve heard of the “Most Interesting Man in the World.” Well, what about the most interesting man in York County? Don Graham would be a candidate. Little is on the public record about this entrepreneur, founder of Graham Packaging and other enterprises. He’s a University of Michigan graduate who started his engineering enterprises in the basement of a York County farmhouse in 1960, according to this website.  This is a great success story that needs to be told.