Did you know that Voni B. Grimes helped oversee Penn State York’s growth? Linked in to York County history, 3/13/13 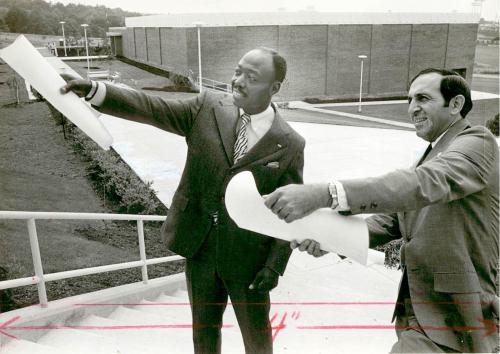 Voni B. Grimes has been a topic of many posts on York Town Square, as we have followed the achievements of this remarkable man. Now the honors for this lifetime of accomplishment continue. Penn State York has named a scholarship in his honor. This photograph, from 1972, shows the scholarship honoree with Edward M. Elias, the originator educator for the then-young campus. They’re discussing plans for the library on campus, now the Edward M. Elias Science Building. As a Penn State administrator from 1969 to 1988, Voni B. Grimes was involved in much of the early building on the hillside campus. For more information about the scholarship in honor of this York High graduate, contact: dkh@psu.edu. Also of interest: For another photograph of Voni B. Grimes as a Penn State administrator, see: Penn State York leaders.

The York Daily Record/Sunday New is planning for its coverage of the 150th anniversary of the Battle of Gettysburg.

Not only do we have the battlefield to cover, but extensive military presence was in three counties covered by the YDR and sister newsrooms in Hanover and Chambersburg. So we’re coordinating the efforts of many of our combined 100 or more journalists to cover this moment.

Our bloggers who cover the Civil War, in full or in part, will be assessing, informing and telling stories about this event.

Some others, part of Yorkblog’s suite of history bloggers:

Gettysburg congestion: OK, we know how hard it is to navigate around Gettysburg. One solution. Build more road. One problem with that. Buildings might lay pavement over hallowed ground. Such a road is in the works in the Gettysburg-Hunterstown area – on Gettysburg’s east side.

Monitor’s turret: Remember when that most spectacular feature from the Civil War ironclad was raised from the ocean floor? The remains of two sailors came with it. The new place of rest for these fighting men? Arlington National cemetery.

National stage: We continue to follow those who achieved on the national stage. Charles Hartman, who died recently, served in a number of national-level posts: director of highway safety for the Automotive Safety Foundation/Highway Users Federation, first deputy administrator for the newly created National Highway Safety Administration and the founding president of the Motorcycle Safety Foundation, according to a YDR story on this late York County man of accomplishment.

Forum of the day: Historic York Inc. recognizes individuals, groups or companies each year that have gone above and beyond in their preservation efforts. Any houses or buildings that you think should be recognized because someone did a good job fixing them up?
Background: York County treasures .