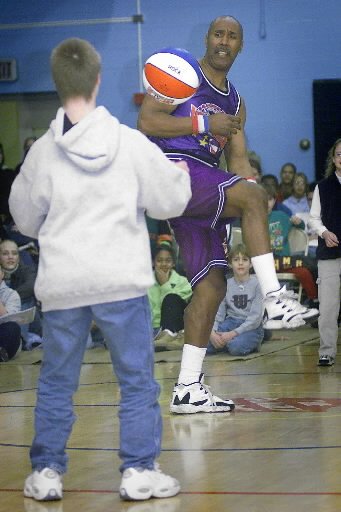 The Harlem Wizards played in York, Pa.’s Salvation Army’s gym in 1999. More than 30 years before, a young basketball player, performing for a visiting Salvation Army team, reportedly on that same floor. The youngster? Julius Erving, popularly known as Dr. J. Also of interest: JFK contributed to Salvation Army’s building in his 1960 visit to York.

Here’s one from local Salvation Army officials that someone out there might help with.

The story is that a game at the organization’s East King Street gym pitted a Salvation Army team from Nassau County on Long Island, N.Y., versus a local team.

At the time – sometime in the early 1960s – that the New York youngsters came to town, the Long Islanders were undefeated.

Not so when it left.

And the team’s star player?

Wonder if young Dr. J. dunked in that gym?  Later, he popularized the spectacular slam dunk in the American Basketball Association and with the Philadelphia 76’ers in the NBA.

And don’t argue that Dr. J probably couldn’t clear the rim as a 12 year old. He probably dunked in his crib.

Julius Erving did play in York as a member of a SA team, reportedly at the local Salvation Army gym.

Erving was at York College on Friday night to speak to an attentive audience at Wolf Gymnasium, in the fourth and final installment of a lecture series sponsored by the college. He spoke for about 45 minutes before engaging the audience in a question-and-answer session that lasted another hour.

Erving started his lecture by reminiscing about his first trip to York – some 40 years ago, at the age of 12 – as a member of the Hempstead (N.Y.) Salvation Army biddy basketball squad.

Erving’s team made it to the finals of a tournament held here, before losing to a team from the Crispus Attucks recreational center.

They had a guy 6-foot-2,” Erving recalled, “who the refs wouldn’t call three seconds on. He was unguardable.”

When Erving was inducted into basketball’s Hall of Fame in 1993, a banner from the Hempstead Salvation Army was hanging behind the podium. It was a measure of what those moments, some of which occurred here in York, meant to Erving years later.

Wouldn’t it be a wonderful if Dr. J. came back and held a clinic in the SA gym for city youngsters?

And, does  anyone have recollections about this long-ago Dr. J. tie? Who was that 6-foot-2 player who lived in the lane? Maybe Dr. J. and that player could play a little one on one.

In time of war in New York, N.Y., to York, Pa., the Salvation Army stands on the front lines