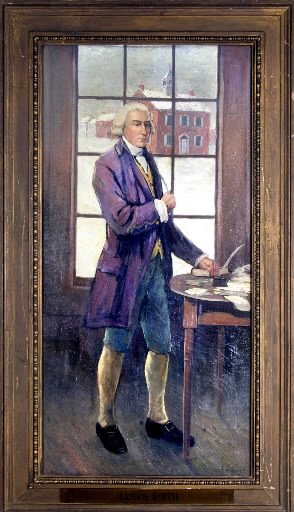 In summer 1776, James Smith signed both the Declaration of Independence and the Pennsylvania Constitution. The York, Pa., lawyer also served in the Continental Congress during that body’s visit to York County after British troops forced members from Philadelphia. Background posts: 400 years ago, John Smith explored Chesapeake Bay – 1 of 20 iconic images, Where was Thomas Jefferson when Congress met in York?, and Who will lead York in the future?

In plain view: James Smith, who signed the Declaration of Independence, stands in his South George Street law office, used by the Board of War during the Continental Congress’ nine-month visit to York, then York Town, from Sept. 30, 1777, to June 27, 1778.
Behind the scene: The same snow that covered York Town’s Centre Square and York County Court House, where Congress met, coated George Washington’s troops shivering in Valley Forge. This was one of 16 paintings commissioned in 1927 to celebrate the 150th anniversary of the adoption of the Articles of Confederation in York Town. This particular painting pulls together several elements of that local event of national import: the patriots, the remote town where they met and the long winter that challenged their efforts to build a nation. This moment is considered by many to be York County’s largest contribution to America’s history and is easily the most celebrated moment in the county’s past. A copy of this painting, or perhaps a sister painting, hangs in the Masonic Lodge, north of York.
Further details: All 16 portraits are periodically displayed by their owner, the York County Heritage Trust. To see the set, click here. Also, see Betty Stein’s “Continental Congress Courageous – The Delegates At Yorktown, Pa. 1777-78” for bios of all 64 delegates to Congress during 1777-78. The book was published as part of York County’s 225th anniversary celebration of the adoption of the Articles of Confederation in 2002.
Posts in this series:
– 400 years ago, John Smith explored Chesapeake Bay – 1/31 iconic images
– Declaration signer James Smith tops York County patriot list – 2/31 iconic images
– Going to market a longtime York County pastime – 3/31 iconic images
– William C. Goodridge: From slavery to success story – 4/31 iconic images