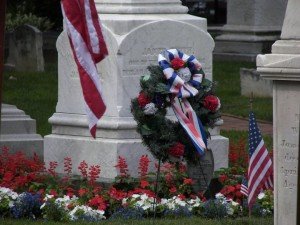 The memory of York’s unsung Declaration of Independence signer James Smith will receive a song at his gravesite (above) on Independence Day. The Colonel James Smith-Yorktown Chapter of the Daughters of the American Revolution will lead a service at 10 a.m., July 4, at  First Presbyterian Church.  Many well-known York countians will participate. Yorkblogger June Lloyd will give some background on James Smith. Jeff Hines will read the Declaration. A couple of First Presbyterian members will tie the church’s  250th anniversary celebration into the event: Cindy Lobach will conduct a history tour of the graveyard, and Charles Letocha will lead a tour of the church’s beautiful stained-glass windows. (See additional photograph of his gravesite below.) Also of interest: Continental Congress struggled into York, and delegates strutted back to Philly 9 months later.

And a caption of a slideshow of Koons’ art states: “Based on auction prices, Koons is currently the most expensive living artist in the world.”

High prices aside, that slideshow will again raise the question: York County native Jeff Koons’ work raises question: But is it art?

A fight in Congress?: Yes, in the mid-1800s. And you thought the vitriol was bad today. York Sunday News columnist Gordon Freireich writes about a local link to that fight in: A modern fist fight and a York historic figure That historic figure is Adam Glossbrenner, sergeant at arms in Congress and a York countian.

Forum of the day: York Barbell, host of a powerlifting meet over the weekend, has been a major promoter of health and fitness nationally. Yet the stats show that many York countians are overweight. Why has Muscletown U.S.A. become the obesity capital of the U.S.? Please comment below. Read more: York countians tipping the scales – 2/3 of us are fat or obese. 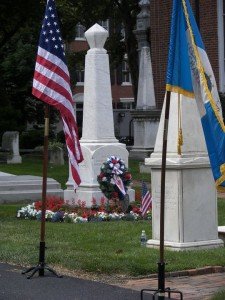