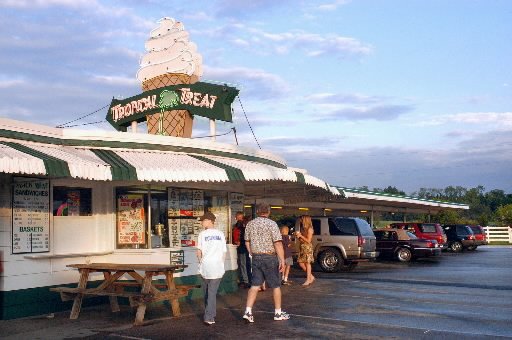 Crabbs Tropical Treat’s seasonal re-opening last week drew its usual long lines and filled parking lot. Those interviewed at the iconic 2279 Carlisle Pike, Hanover, eatery gave responses like this by York’s Lynne Garret: ‘I would never miss opening day. I go through Fat Boy withdrawal.’ How popular is Tropical Treat? The Hanover Evening Sun, posted about the opening on its Facebook page and got this response (which has grown since): 541 likes, 301 shares, 92 comments, and 30,912 people saw the post. This engagement drew the attention of national blogger Steve Buttry, a journalist with the Evening Sun’s owner Digital First Media: Community fun drives Facebook engagement. The YDR’s FB page got in the fun, too: “Guess what opened this week. Will you be there this weekend? And the biggest question of all: Fat boy or Italian steak?” Also of interest: Interstate 83 in York lined out Melvin’s Swan Song.

This prompted an email from a local woman. Her father made moonshine for 50 years at a Spring Grove still, selling it locally and to distributors who broadened its reach across America.

“(H)e was known to make the best, of course he is passed now,” she wrote, “but every one knew.”

Can you build a piece of a 21st-century economy around distilleries and microbreweries and wineries, as we did in the 1700s and 1800s?

Seems like we’re trying to. York County tourism promotion material is full of such tours. Background: With all those stills, the York County hillbillies?

Gettysburg150: The York Daily Record/Sunday is building its social media arsenal to cover the 150th anniversary of the Battle of Gettysburg.

You can’t always get inside BAE to see its operation, but when government started looking at defense cuts recently, the doors of this West Manchester Township defense contract came open. So, BAE made its case to keep production going, according to a recent ydr.com about BAE.