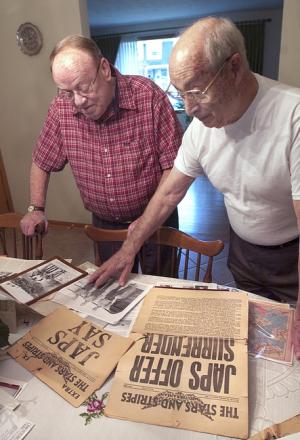 Frank Renda, right, experienced a memorable moment on the Sunday that Pearl Harbor was attacked, 70 years ago today. He delivered a Western Union telegram to York, Pa.’s City Hall about the Japanese attack on the American Naval base, Pearl Harbor.  War War II slogged on long enough Renda was needed to fight the Japanese. Here, he is seen with friend George Shuman looking over war memorabilia. His World War II story is part of the York, Pa., Daily Record/Sunday News ‘Remember’ series. Check out other topics in the ‘Remember’ oral history series. It’s really a remarkable collection. Also of interest: All World War II stories from yorktownsquare.com‘s start.

You might remember that Morgan Brenner brought the comprehensive book “Our Strickler Heritage” to us.

The other day, he also flagged a work of interest: “The Beidler Diaries.”

“The author is an in-law. The first Strickler of our line to move to Hellam Township, Heinrich, Jr., who built the mill, married a Biedler. The original Beidler farm is now Joe Kindig’s home, just west of the Strickler, homestead, Rosevale, on Beidler Road, west of Strickler School Road.

“Absolutely fascinating. Lot of innocuous stuff, but some good history, especially his account of Lincoln’s funeral train, and some neat philosophy for his children – still applicable.”

A different war: As we said, this is Pearl Harbor Day – an anniversary to remember. But there’s another wartime anniversary of note ahead, courtesy of York countian Gene Schenck:

“As you may know, Russ Horn, Jr served with the Army Security Agency (ASA) in Korea and in Europe. This morning he reminded me that the first American member of ASA to fall in Vietnam was SP4 James T. Davis, who served as a 3rd Radio Research Unit assisting elements of the Army of the Republic of Vietnam (ARVN). While Davis was working for ASA his truck was ambushed and he was killed on December 22, 1961.

“While some American advisors for MACV were killed in the 50’s President Lyndon Johnson was quoted saying SP4 James T. Davis ‘the first American to fall in defense of our freedom in Vietnam.’ Because he was first to die after direct military involvement began.

“Hard to believe we’re coming up on the 50th anniversary of that event.”

A historical restoration: A copy of the 13th Amendment, signed by Abraham Lincoln, restored.

Sports history: Keep in mind that all kinds of stats and stories marking York County’s sports past are available at www.gametimepa.com.

Civil War Christmas – How was Christmas observed in the Civil War? Re-enactors give a view.

Forum of the day: Exchangers are discussing the Pearl Harbor Day topic: Retribution, The Battle for Japan.