Scull’s map of York County shows York as a busy crossroad community in 1770. The roads led to nearby towns and cities – just like today. Some people believe this proximity can be developed into a brand or theme for York County. Also of interest: York Sunday News columnist: ‘Time for York to break shackles of Colonialism’ York County, sitting among high-profile tourism sites, has experienced an identity crisis for decades, maybe centuries.

Those seeking to hang a theme on York County have not been rewarded with stickiness.

The national capital moved here in 1777-78, but stayed for only nine months. Later, national leaders fished around the banks of the Susquehanna River a permanent capital site but created a national district about 75 miles to the south.

York County developed inland, and the best we could do is ship our goods to the nearest port, Baltimore, or the slightly farther Philadelphia. Our goods aided Baltimore’s development, and its Inner Harbor and other attractions beckon to York countians today.

Blue and gray Civil War armies happened into each other at a crossroads 30 miles west from here, forever overshadowing major military events in York County.

We have few Amish.

We make chocolate here, but not with the quantity of that produced in milk chocolate land northeast of here. In fact, Hershey Foods owns our most famous contribution to the chocolate world, the cool-breeze York Peppermint Patties now made in Mexico.

York County’s two most nationally prominent events are the site of the adoption of the Articles of Confederation in 1777 and the York Plan’s effectiveness in manufacturing ordnance and other stuff for the military in World War II.
Major, but not captivating, achievements.

These themes have not stood the test of time or captured the attention of the outside world.

A current theme downtown, Creativity Unleashed, might work for a growing arts district but doesn’t appear to have legs in a broader geographical area.

And all this is diluted because the city and county sometimes promote different themes.

What to do?
+++
Joanne Ekeledo has an idea that’s been out there before, but now comes from street level.
She moved here from Baltimore, has an interior design and fundraising background and operates Grace Manor Bed and Breakfast on York’s West Market Street.

So she’s in contact with many visitors to York. Many are aware of — and enjoy — York’s attractions, but a feature they appreciate about the county is that it’s near everything.

She cites the example of guests from Iowa, who stayed in her bed and breakfast as part of a trip to see their son play football against Penn State. By staying in York, they said they could most efficiently see southcentral Pennsylvania.

York County is, well, a hub.

That’s a term that came from Karen Chronister, a co-worker at Logos Academy who has a background in marketing.

The colleagues discussed a Hub-with-spokes image. York County is the hub with spokes leading in all directions.

That’s 30 miles in all directions – to Lancaster, Harrisburg and Gettysburg. Well, make that 50 miles to Baltimore.

Maybe that could be Hub+, to include the county’s attractions in the brand.

The ‘York-near-everything’ brand has not been embraced by visiting consultants, who argue that it is not original, that it is used elsewhere.

But maybe the time has come to play on authenticity. We embrace who we are and not stretch to play up who we aren’t.
+++
Joanne Ekeledo has listened to her guests and comes away with the belief that the Hub theme fits York County.
“It’s not something to look at as a negative,” she said. “Use it.” 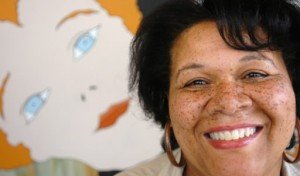 Joanne P. Ekeledo, seen in this 2008 photo, operates Grace Manor Bed and Breakfast in the 200 block of West Market Street. Jim Rudisill, writing in ‘York Since 1941’, states that the building represents turn-of-the-20th century prosperity in York County. ‘Such prosperity is reflected in the dated keystone (1901) to be seen surmounting the new facade of the early 1840s remodeled H.K. Welsh building at 258 West Market.’ 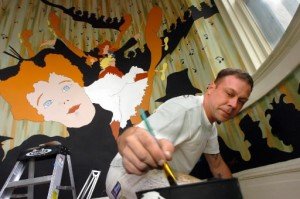 Dave Lynch creates a mural at Grace Manor in 2008.