Deadly York fire: ‘There never was a more horrible one’ 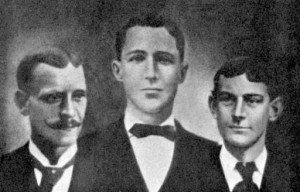 Harry Saltzgiver, Lewis Strubinger and Horace Strine were killed April 6, 1904, in a fire that destroyed an industrial building in York. This image appeared in the book ‘History of the York Fire Department 1776-1976.’ Also of interest: Photo of the deadly York Carriage Works fire and A list of traumatic, painful incidents that rocked York County.
The nine firefighters who died in South Carolina bring to mind the fire in York County’s past that exacted the greatest toll on the men battling it.
A blaze at the six-story York Carriage Works building on April 6, 1904, claimed the lives of three firefighters.
Heroic actions saved the lives of two others, as a York Daily Record story from 2004 reports:

“There may have been more costly fires in York , but there never was a more horrible one.”
These were the words appearing under the headline “York’s Worst Fire,” in The Gazette and Daily newspaper in a report on a 1904 fire that killed three York firefighters.
Harry Saltzgiver, Lewis Strubinger and Horace Strine died battling a massive fire at the York Carriage Works on North George Street on April 6, 1904.
The three Vigilant Fire Company firefighters were trapped inside the six-story building and were crushed from falling walls, according to news accounts.
One hundred years later, to commemorate the event, flags at each of the city’s fire stations were flown at half-staff, starting at 8 a.m. Tuesday. The flags are to be raised ceremoniously this morning at 8.
“The tragedy that occurred 100 years ago should serve as a reminder to all of us of the sacrifices and the hard work of our firefighters,” said York Mayor John Brenner in a prepared statement.
The three men were the first firefighters to die in the line of duty in the history of the city fire department.
The York Carriage Works fire is called the “most tragic firefighting job in the history of the Vigilant Company,” according to a book called “History of the York Fire Department 1776-1976.”
Fellow firefighters, frantically searching the rubble and moving tons of hot bricks, were sickened as the “odor of roasting human flesh offended their nostrils,” according to a historic account in “Never to be Forgotten.”
Employees were seen jumping to safety from the building’s upper floors.
The destruction caused an estimated $200,000 in damage and left 253 people out of work.
News accounts described how the offices at the neighboring Variety Iron Works were turned into a temporary morgue.
The 1904 fire is a reminder that firefighters are part of an exceptionally dangerous and challenging profession, said city Fire Chief John Senft.
A statue in Penn Common was dedicated to perpetuate the memory of all firefighters who have died.
The statue has since been relocated to the fire museum at the former Station No. 6 at Market Street and Carlisle Avenue.
The anniversary of the 1904 fire is a reminder of the heroics of firefighters.
As the Carriage Works walls fell, firemen immediately rushed to the area and succeeded in rescuing two other firefighters, William Jones and Ralph Shaunessy, who made “miraculous escapes from death,” the story went.