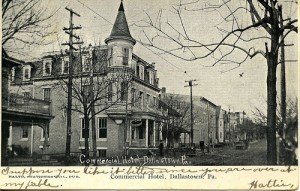 The Commercial Hotel is the most dominant building on Dallastown’s square – the traditional center of the borough sitting along Route 74. The old hotel, at the corner of Walnut and Main streets, is now used as apartments. It’s still one of the most architecturally prominent buildings in Dallastown, which incorporated as a borough in 1866. (Click on photograph to enlarge. See another postcard view of Dallastown below.) Also of interest: LBJ’s, Lady Bird’s visit in 1966 a high point in Dallastown’s history and LBJ in Dallastown: In small towns, girls are fonder; dinner pails fuller.

The Dallastown Area Historical Society has taken to the web to move ahead its mission: Preserving the history and heritage of that borough along Route 74, the old road from York to Peach Bottom.

Board member Mike Sentz emailed greetings and some links that extend word about Dallastown’s past:

“We are most likely among the smallest of the historical preservation organizations in the county. Our meeting generally involve less than ten people, but the members are passionate about our town … .

We have a small museum on Main Street in Dallastown in the old fire hall, and a growing archive of donated material. Recently I have started a few places on the internet to post some of our happenings, interesting things in our collections and unknown things that someone may be able to help us identify.”

Check out these social media links on:

I think the use of the Web and social media is the route historical groups must take. Museums are helpful in telling the stories of communities, but virtual visitors are becoming more valuable, as Dallastown’s group is seeing.

I  wrote the following in a York Sunday News column today, adapted from a recent blog post. It discussed the opening of two new museums in Hanover at a time when such galleries are closing or consolidating elsewhere:

“The question always emerges: Will the enthusiasm and vision and dollars of museum founders persist as the years pass?
” Glen Rock just opened a new museum. Groups in New Freedom and Dallastown opened exhibition space in recent years.
” Many towns around York County have a museum, which often serve as neat community gathering places.
” I’ve long held that such efforts must be supplemented by virtual exhibits and other searchable historical information on the web.
“At some point, a crossover will occur in which digital visitors will replace patrons visiting bricks and mortar venues as the prime audience for local heritage groups.
“For now, folks in Hanover are zigging while other groups are zagging.
“Maybe York County should promote the concept: Land of Museums.”

The bottom line is that the Dallastown Area Historical Society is making the right move in reaching an audience via the web to supplement its considerable efforts in its collections at the old fire hall. 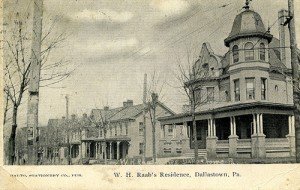 The architectually significant former W.H. Raab residence sits today, as in this postcard, across from Glatfelter’s Furniture store on East Main street. Cathy Keller Bankoske shared the two postcards with this post, and the historical society posted them on Flickr.  The society will scan old photos or postcards and make them available to the public. The group meets at 7 p.m. the first Thursday of each month in the museum at 118 East Main Street. The museum is open the first Sunday of each month from 1 – 3 p.m.

– Dallastown woman wrote to the big man himself, and Jerry Ford responded