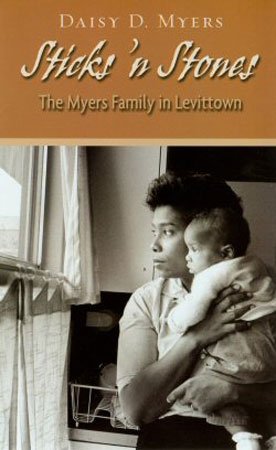 Fifty-one years ago, Daisy Myers and her family were victims of racial harassment after they moved into a new home in Levittown, Pa. This incident was included in a recent New York Times Magazine article. This is the cover of her autobiography telling about her Levittown experience, available at www.yorkheritage.org. Background posts: Daisy Myers: Rosa Parks of the North, A short test of your York, Pa., black history knowledge and Doris Kearns Goodwin gives tips to analyze presidential hopefuls.
Daisy Myers has been a York County resident going on 50 years. She has been in high-profile positions as a York City Schools administrator and assistant to Congressman Bill Goodling.
But many York countians aren’t aware that she and her family made national news for holding out against racial harassment after moving into their dream home in the planned community of Levittown in Bucks County in 1957.
From time to time, their courage is remembered… .

An exhibit at the State Museum several years ago brought that moment back onto the stage. The York County Heritage Trust published her autobiography soon after that.
The New York Times Magazine reminded us again of those days that eventually prompted Gov. George Leader, a York County native, to send in state police to quell unrest. The April 6 article focused on Levittown’s political leanings as Barack Obama’s and Hillary Clinton’s campaigns moved to Pennsylvania.
An excerpt from Michael Sokolove’s Change Makes a Call on Levittown (the writer also is a former Levittown resident), follows:

And on matters of race Levittown has a particularly shameful history. It was billed as “the most perfectly planned community in America,” and part of the plan was for it to be whites-only: 5,500 acres, stretching across three Pennsylvania townships and one borough, closed off to blacks. The first development of mass-produced homes by Levitt & Sons, Levittown, N.Y., on Long Island, which dates from 1947, had the same exclusionary policies. William Levitt weakly insisted that he would love to sell houses to black families but had “come to know that if we sell one house to a Negro family, then 90 to 95 percent of our white customers will not buy into the community. That is their attitude, not ours.”
In 1957, when a black family, the Myers, finally did move into Levittown, Pa., after buying from an original owner, their home was besieged for several nights by a mob that numbered in the hundreds. Rocks were hurled through the windows. In seeking a court order to stop the harassment, Daisy Myers referred to “annoying practices,” which included parades of cars rolling by her home as the occupants sang “Old Black Joe” and “Dixie.”
That was a half-century ago. Still, by the numbers, Levittown is not much changed. According to the last U.S. Census, just 2 percent of its 54,000 residents are African-American; about an equal percentage are Hispanic. The town’s white population includes many second- and even third-generation residents. Could Obama connect here? When his impassioned volunteers came around, would people open their screen doors and talk to them? And if Levittown seemed to prefer Hillary Clinton, did that make it a place that remained wary of blacks — or one that, for whatever economic or cultural reasons, was just not attuned to his message?