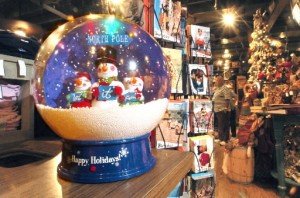 Customers at York Township’s Cracker Barrel in 2006 scrambled for a desktop version of last-year’s lawn-sized snowball. The York Township’s store was the chain’s first in Pennsylvania. Also of interest: Wal-Mart planted first Pennsylvania store in old York Mall, and the giant grew from there.

The cracker barrel in old country stores served as focal points in communities for social interaction.
As fellow Yorkblogger Scott Mingus explains in his “The Cracker Barrel” post, the modern country cooking restaurant chain draws on this nostalgia as a gathering place for travelers and visitors.
He goes on to tell of a Civil War moment in which a cracker barrel in southwestern York County’s Porters Sideling incapacitated a clerk as rebels plundered his store. You have to read the yarn. (See: Abe Lincoln, Gwyneth Paltrow passed through Porters Sideling.
But here’s a current twist on the cracker barrel in York’s past.
Did you know the first Cracker Barrel restaurant/store in Pennsylvania opened in York County in 1994?…

That York Township store marked No. 199 for the restaurant company that likes locations along busy highways such as I-83. The York County site meant the chain was located in 23 states.
When the Cracker Barrel opened in Shrewsbury in 2005, that was the chain’s 20th Pennsylvania store and 518th overall. By that time, it had expanded into 41 states.
Here’s a York Daily Record on the store’s opening in August 1994:

The Cracker Barrel Old Country Store sign has risen alongside the highway. Three truckloads of dishes, tableware and gift-shop merchandise were scheduled for delivery this week.
Two hundred new employees begin their training Saturday. And on Monday, Aug. 15, the Lebanon, Tenn.-based restaurant chain will open its first Pennsylvania store.
The trademark rustic rocking chairs on the front porch will overlook Pauline Drive in York Township.
The chain always opens new restaurants on Mondays, the slower part of the week, “”so the staff slowly adjusts to business and by Friday and Saturday they’re more comfortable,” said Candy Miller senior store-opening supervisor.
Cracker Barrel offers no franchises; they all are company stores. Intended as replicas of old general stores, the gift shops are decorated in antiques not for sale, old photographs, memorabilia and … cracker barrels.
They sell old-fashioned candies, jams and jellies, pure sorghum molasses and other foods, housewares and crafts. Typically, the restaurant generates 80 percent of the net sales for a location, and the gift shop contributes 20 percent, said Sonya Field, marketing manager for the chain.
Michael Starr will lead a management team that includes one York Countian, Kim Connor, who will run the gift shop.
With this site, Cracker Barrel No. 199, the chain will own restaurants in 23 states. The company has been expanding rapidly, so it’s not surprising that restaurant sales rose by 28 percent in the fiscal year ended June 1993, compared to the year before.
But the increases aren’t just from having more stores. Same-store sales (sales of stores open a year or more) rose by 7 percent in 1993, including a 3 percent increase in menu prices and a 4 percent increase in real sales.
Cracker Barrel is one of a number of chain eateries expanding into York County. David Schad of Bennett Williams Inc., the York-based real estate firm, said most of the new restaurants opened recently in York County have been chain operations.
“”People in York County are very fickle,” said Lorraine Nease, co-owner of Talk of the Town, 1211 Haines Road. “”They do patronize the chains.”
Because this issue has become her pet peeve, she said, she has added to her newspaper advertisements the initials SYLOR “”Support Your Locally Owned Restaurants.”
Once upon a time, Cracker Barrel was a single local store. It started in 1969 when Dan W. Evins, a sales representative for Shell Oil, decided he could sell more gas if a restaurant accompanied the station. By 1977, the chain had 13 restaurants in Tennessee and Georgia, but the oil embargo forced Cracker Barrel to stop selling gasoline.
The company first offered public stock in 1981 and became one of Money Magazine’s top 12 stock picks. Annually since 1991, Restaurants & Institutions magazine has called Cracker Barrel the best family dining chain.
Although “”1994 was another record year, the stock has not performed well in the past year,” said Steven A. Rockwell, a securities analyst for Alex Brown & Sons, Baltimore. The company typically hires 200 people to start a new restaurant.
Cracker Barrel drew protests from Queer Nation-Atlanta after an employee was fired in Lebanon, Tenn., for being homosexual. The protests spread. A New York City pension fund holding 121,650 shares of stock, joined by a Philadelphia pension fund, also pressured Cracker Barrel to adopt a policy against discrimination because of sexual orientation.
“”We never had a hiring practice at all; we’re an equal opportunity employer,” Field said “”Cracker Barrel is a very good place to work.” The controversy appears to have cooled.
Rockwell, the securities analyst, said he hasn’t heard any complaint about Cracker Barrel’s hiring practices in the past year.