All roads lead to – and from – Cross Roads: The boroughs of York County series, No. 8

In 2006, Frederick Konhaus’ summer home was in use as the polling place for Cross Roads borough in southeastern York County. The scene captures the smalltown feel of this community built around intersections. Also of interest: Church’s story links up with U.S. religious history and Southeastern York County made for Sunday drive and Pioneering sisters operated York County grist mill.

Eighth in a series of occasional posts about York County’s 36 boroughs (see Felton, Yorkana, Lewisberry, Hanover, Hallam and Winterstown.)… .
Cross Roads is on the map because, well, it’s a place where at least five roads intersect.
Those roads lead to various key destinations in the Muddy Creek watershed. Cross Mill. Muddy Creek itself. The Ma & Pa Railroad, which often ran along Muddy Creek, and was headquartered in nearby Muddy Creek Forks village.
The Cross Roads vicinity was home to Scots-Irish after the 1700s migration from Scotland and northern Ireland and, thus, many Presbyterian churches meet there today. Two stand in close proximity near the borough.
One of those churches, Round Hill Presbyterian Church, is an architectural gem.
Cross Roads sits in “The Barrens,” by reputation not York County’s best farmland. But its bucolic setting among rolling farms today suggest a still-strong agricultural focus… .

York Township’s Dianne Bowders traveled to Cross Roads to capture this picture of Hershall Park bandstand. She noted that the of park provides vistas of beautiful farm land.
What others say about Cross Roads: George Prowell in 1907 – “Cross Roads Borough, in the northern part of East Hopewell Township, is an interesting hamlet.” He did not explain that statement, but he does note that the borough played host to a store as early in 1841. John Logan served as postmaster for 58 years up to the time of his death in 1900. That was the longest of any postmaster in the United States, Prowell claims.
What are the barrens? Ron Hershner: The area covered by the watershed of Muddy Creek and its tributaries. “That entire watershed was known, derisively, as ‘the Barrens,’ the name given in that time to any stark, unproductive, presumably infertile land area,” Hershner wrote in “Round Hill Presbyterian Church.” The part of the Barrens first settled was southern Chanceford Township, now Lower Chanceford, and eastern Fawn Township, now Peach Bottom Township.
Early settlers: the Alexander, Wallace, Nelson, Carr, Kelley and Manifold.
Population in 2000 – 2000 population:
518; 2010 population: 512. (Census 2010, York Daily Record/Sunday News.)
Incorporated: Oct. 6, 1899. (York County founding dates.)
To learn more: York attorney and native son Ron Hershner has written extensively about Cross Roads including: “Round Hill Presbyterian Church, 250 Years of Faith,” and “Cross Roads: A History and Reminiscences.”
Memorable moment: The second Hershner book tells about a moment when a bunch of visitors came to Cross Roads. The village was the destination of 30 wagons loaded with personal belongings advancing east ahead of the Confederate invasion of York County in June 1863. With animals in tow, they came from Seven Valleys and Hanover Junction and camped in a valley on Rambo Run, east of Cross Roads.
Also of interest:
– York, Pa., Daily Record/Sunday News has aggregated a wealth of 2010 census information about Cross Roads and other York County boroughs and township.
– Other posts in this The boroughs of York County series … . 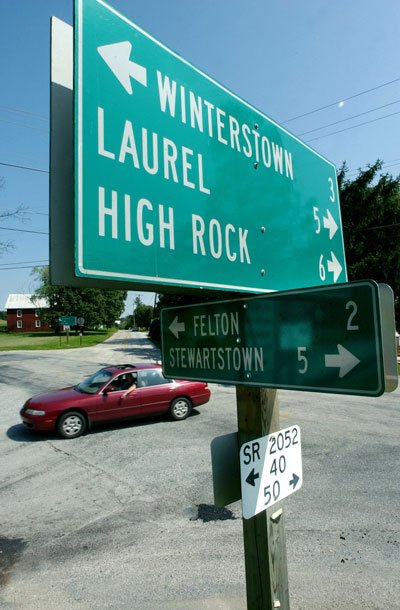 This sign kind of defines Cross Roads borough.
Archives:
– All York Town Square posts from the start. (Key word search by using “find” on browser.)
– Of course, you can always search for York Town Square posts on Google. For example, search for yorktownsquare and Winterstown and you get this.
Sources: George Prowell’s “History of York County,” “Gazetteer of York and Adams Counties.” Photos: “Hanover Area Pictorial Directory,” 1995.
*Edited, 3/30/11