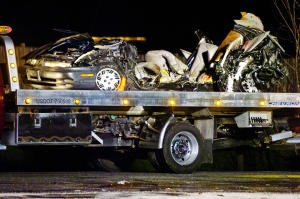 Five New Oxford, Pa., High School students in this Saturn died in a head-on collision earlier this week. The accident occurred on Adams County’s Route 94, north of Cross Keys. It is the highest toll in York/Adams’ traffic accidents in memory.  For details, visit: 5 killed. Also of interest: All pain and trauma posts on yorktownsquare.com from the start.

The Hanover Evening Sun researched traffic fatalities in and around York/Adams and could not find a death toll amounting to five – the number of  students killed in Monday’s after-school crash.

How does that terrible toll compare to lives lost in other mass casualty cases in those two counties in history, backing out the tolls from war?

Here are some comparisons:

– At least five people lost their lives in the waters of Tropical Storm Agnes in 1972.

– The York Rolling Mills explosion more than 100 years ago is the worst industrial accident on record in York County. The blast killed 10 people and reportedly injured up to 20 workers at the plant along the Codorus Creek in York.

– In the early 1990s, Paul Gamboa-Taylor pleaded guilty to killing five people with a ball-peen hammer and knife in York. Gamboa-Taylor is the worst mass murderer on record in York County. (Mark Spotz killed three women in this region after murdering his brother in Clearfield County in a fight over a gerbil.)

– History remembers these unfortunate and painful moments. They are, indeed, comparatively low when casualties of war reckoned. For example, 300 blue and gray horsemen were dead, wounded or missing after the Battle of Hanover in July 1863. And of course, thousands upon thousands died in the subsequent Battle of Gettysburg in Adams County. Five hundred or more fighting men from York County reportedly died in the Civil  War. More than 570 men died in World War II.

This one counts, too:

On Christmas Day 1944, 11 servicemen died on York County soil. Their plane crashed as it attempted to land at Harrisburg Airport.

Here’s the account from my “Never to be Forgotten:”

“An additional 16 are injured when the transport traveling from Jacksonville, Fla., to Minneapolis, crashes on Roundtop Mountain near New Cumberland. ‘It was the worst sight I ever saw,’ Fire Chief William Vogelsong of New Cumberland said. ‘The men were in the plane crying for help, and we had to cut our way to them with an ax. Part of one wing was on a tree 200 feet from the plane.’ York County coroner L.U. Zech aided in the investigation. None of the dead hailed from the county, but the incident gives county residents a first-hand look at the cost of war.”

So, with the death toll of five, Monday’s Adams County collision ranks up there in York/Adams history in non-military related mass casualties.