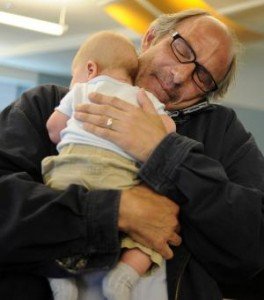 Denver Post photographer Craig F. Walker, a York Suburban High School graduate, multi-tasks on Monday. He hugs his son, Quinn,  and tells his mom he won a Pulitzer Prize for Feature Photography. (It doesn’t get better than that.) That is his second Pulitzer. He won for his gallery about a veteran’s  battle with PTSD. For more on that story, check out: Scott Ostrom.

He won Monday for his  photo essay on a veteran’s struggles upon his return from Middle East fighting. He captured a Pulitzer, journalism’s top prize in 2010,  for his photo gallery on a teenager adjusting to military life.

As a point of interest, Craig F. Walker also worked as a free-lance photographer for the York Daily Record for about six months in the late 1980s.

Also this week, Philadelphia Inquirer photographer David Swanson was part of a team of three photographers and five reporters who won the Pulitzer Prize for Public Service. They covered school violence in “Assault on Learning.”

Swanson graduated from York County Day School and also freelanced for the York Daily Record in the 1980s.

Several people with York/Adams ties  have won Pulitzer Prizes in the past.

Here’s a list of those who won Pulitzers, or ties to the coveted award, compiled from York Town Square and the York Daily Record/Sunday News sources:

Dominick Argento: The York native won for  music in 1975 for “From the Diary of Virginia Woolf.”

Frederick Woltman: The native Yorker won the prize in 1947 for reporting on “The Infiltration of Communism into the United States.”

Robert C. Maynard: The former Gazette and Daily reporter’s Oakland Tribune, won for photojournalism for coverage of the 1989 earthquake. He co-owned the newspaper at that time.

Clarence Williams: The former intern with the York Daily Record won for feature photography in 1998.

Bruce Ritter: A York native and former artist with the York Daily Record worked on a Knight- Ridder newspapers team covering critical flooding in Grand Forks, N.D. It won in 1998.

Ivey DeJesus and Jeff Frantz:  Sara Ganim and The Patriot-News received word that they won a Pulitzer Monday for work on the Penn State scandal involving child abuse charges against former assistant coach Jerry Sandusky. According to a Patriot-News story, stories by Ivey DeJesus and Jeff Frantz, former York Daily Record reporters, were part of the entry.

And as a bit of an asterisk, cold warrior George Kennan, a part-time resident of eastern Adams County, won two Pulitzers.

York County has produced the following achievers as well: