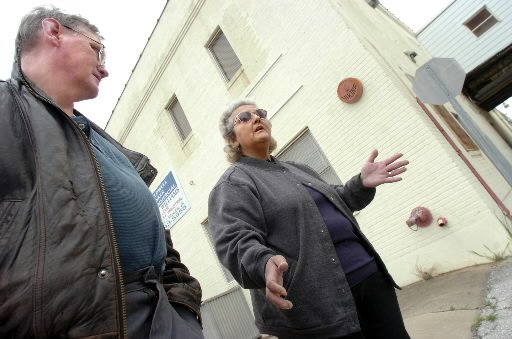 By now, many people know that York Peppermint Patties are no longer produced in York.
Haven’t been since 1989.
Soon, they will no longer be produced in Reading.
Maybe Monterrey, Mexico.
A cool bite of history: .. .

Henry C. Kessler Sr., a York businessman, started manufacturing the chocolate-covered peppermint creme candy before World War II.
His candy was firm and crisp.
George Woody, a consulting engineer, later recalled the final exam for all patties – the snap test.
“If the candy didn’t break clean in the middle,” he said, “it was a second.”
That’s true, and seconds were first in many minds.
Many people came to the company’s Pine Street plant to scoop up imperfect patties.
Mike Argento’s column about Hershey Foods’ proposed move follows: …

It was bad enough when York Peppermint Pattie lit out for the territories and wound up in Reading, home of outlet shopping and, well, outlet shopping, and I’m sure something else, but I can’t recall right now and it’s really not that important considering the issue at hand is the York Peppermint Pattie and its future locale of origin.
To many of us, it just seemed, well, obscene that the York Peppermint Pattie, known throughout the civilized world as confectionery ambassador for York, Pa., would be made in Reading, of all places. It’s not the Reading Peppermint Pattie. Reading did not provide the world with the perfect mix of dark chocolate and peppermint stuff. Reading is not known for peppermint patties. Reading is known as a place where you can purchase Nikes cheap.
It was hard to take.
But now?
Are you ready for York Peppermint Patties being made in Mexico?
Or maybe India?
How about China?
Are you ready for the Beijing Peppermint Pattie? Or the Shanghai Peppermint Pattie? Shanghai Peppermint Pattie sounds like something involving a “Peanuts” character in some Asian house of ill repute.
Perhaps I’m getting ahead of myself.
First, let’s review the history of the
Peppermint Pattie.
It was the brainchild of Henry C. Kessler at the now-defunct York Cone Co., which made ice cream cones starting in the 1920s. Looking to expand the scope of the business, Kessler set out to invent a new candy, one that would meld chocolate and peppermint in perfect harmony. He wanted his candy to be firm and crisp, unlike other chocolate-covered peppermint candies that were gummy and nasty, the kind of stuff they’d get away with in places like Reading.
In 1940, the Peppermint Pattie made its local debut.
It didn’t take long for the York Peppermint Pattie to become the premier chocolate-covered peppermint candy. The York Cone Co. even stopped making cones, devoting all of its energy to the pattie. It was exported all over the Northeast and in Florida, despite no advertising. York became synonymous with dark chocolate and peppermint.
It just wasn’t any peppermint pattie; it was a York Peppermint Pattie.
York, right?
The beginning of the end occurred in 1972, when Peter Paul acquired York Cone. Peter Paul took it national in 1975.
Skip ahead to 1988, and some corporate feeding frenzies, and Hershey Foods wound up with York Peppermint Patties.
The first sacrilege?
Hershey moved production of the York Peppermint Pattie to Reading.
Did the company change the name to the Reading Peppermint Pattie?
Of course not.
It was the York Peppermint Pattie, even though it was being made an hour away in a town known for being a place where you could buy jeans cheap.
We could accept that. It still had York in the name, and we garnered the good repute, even though people in Reading, Hershey and elsewhere reaped the fiscal benefits.
We still had our pride.
And then, news arrived that Hershey was closing its Reading plant – home of the York Peppermint Pattie.
As if that wasn’t bad enough, about 260 people will lose their jobs when the plant shuts its doors in 2008. Hershey is apparently having some rough times, brought on, no doubt, by the bad karma caused by moving York Peppermint Pattie production to a town known for cheap brassieres.
The final insult came from Hershey. I called the company, which, believe me, is nothing like calling Willie Wonka or anything like that. I listened to about five minutes of recorded messages – hoping to hear, “Press 1 for the Oompa Loompas” – before getting the voice mail of a human. (The recorded voice assured me, “Your call is important to us.” If it’s so important … never mind.)
I talked to a guy named Kirk Saville. I didn’t get a chance to ask about the Oompa Loompas.
He said the company is not announcing specifics as “we implement our supply-chain transition.” “Supply-chain transition” apparently means closing plants and throwing people out of work.
York Peppermint Patties could be made, he said, at an existing Hershey plant, “one of our manufacturing partners” or at Monterrey.
Monterrey is in Mexico. Hershey’s “manufacturing partners,” I suppose, could be one of the other overseas contractors making chocolate for the American icon.
So there’s a good chance that York Peppermint Patties will be made in Mexico, or India, or China.
Are you ready for Mumbai Peppermint Patties?

Update, 3/19/10: The wrapper of a bite-size pattie that I picked up at a conference in Hershey stated: “Mfd. in Mexico for The Hershey Company.”