Congressional Aisle Hogs and the mysteries of the purloined pens 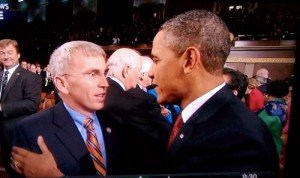 This screen photograph shows President Obama greeting U.S. Rep. Todd Platts before last night’s State of the Union Address. That was Platts’ last address as a congressman. Depending how he performs at the polls in November, this could be Obama’s last. Obama also waved at the gallery where Platts’ two sons were seated, and they had the opportunity to meet the president after the speech. The president asked the Platts boys about school. Also of interest: 10 stories capture lives and times of past U.S. congressmen from York County, Pa. and 9 fun things history will tie to Todd Platts.

Retiring U.S. Congressman Todd Platts has been named by Salon to its list of Aisle Hogs.

Those are the U.S. reps who are known to hug the aisle to shake hands 0r get autographs from U.S. presidents on their way to or from delivering their State of the Union addresses.

Salon reported Tuesday: “A moderate Republican now serving his sixth term, Platts is an accomplished Aisle Hog, a fact that was brought to our attention by his local newspaper, the York Daily Record, after our 2011 list appeared. Platts actually wasn’t on the aisle last year, but a review of the C-Span archive finds that he was there just about every year before then.”

Well, here was our involvement: Salon asked us about our past reporting on Platts’ aisle stance, and we sent them a Mike Argento column which poked at this practice: Todd Platts not an ‘aisle hog’?

All this is good fun, of course.

And Todd Platts is taking it that way.

The York Daily Record/Sunday News reported that Platts was not on the aisle last night, although he and the president met for a friendly moment.

Although Platts has disagreed with Obama administration policy a number of times, he believes his moments with the president should be cordial.

“I’ll always show great respect for the office of the president and for the person entrusted by the people to hold that office,” Platts told the York Daily Record/Sunday News.

But back to the fun, again from Argento.

There’s been a couple of moments in which the ownership of the presidential pen used to sign autographs is in question. We’ve already written about a 2009 encounter in which Argento established that the pen was Platts’ to begin with.

But let’s go back to an Argento column from 2009 and let him tell the story as only Mike can:

“During a past State of the Union Address, though, Platts was the victim of a theft. It was about two or three years ago, Platts said, when he handed his ceremonial copy of the speech and a marker to President Bush. Bush signed the copy, handed it back and took off with Platts’ pen.

“It ends well, though. About 10 minutes later, Platts said he saw Bush outside the House chamber and Bush said, ‘Platts, I stole your pen.’ ”

“Bush handed the purloined pen back to its rightful owner.”