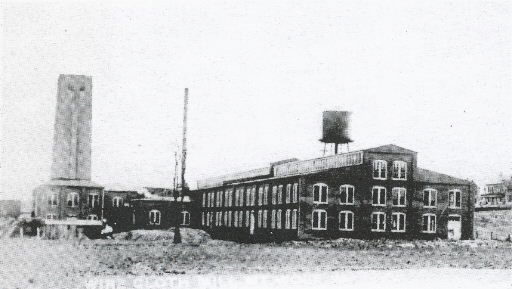 A Mount Wolf, Pa., community landmark, the old wire cloth factory, is coming down. The demolition is fascinating townspeople as a recent York Daily Record/Sunday News story reports. Interesting that this old Pennsylvania Wire Cloth plant, later New York Wire, is being demolished for scrap metal salvage. A manufacturer that made screens from metal for decades is more valuable today as scrap metal. The tall structure  in this photograph was a drying tower, part of the screen fabrication process. Also of interest: These posts reference ‘wire cloth.’

“Learn what businesses and industries made Glen Rock the third largest commercial – manufacturing town in York County in 1921 and much more,” a new release states.

The tour also will give those attending a feel for how the borough is recovering from Hurricane Lee flooding.

The hilly borough, located partially in a valley, was one of the most heavily populated areas affected by the September storm.

Blog post of the day: Cannonball’s Scott Mingus has put up this interesting read – another Hurricane Lee casualty: Rebel grave along Susquehanna damaged by floodwaters .

Forum of the day:  A permit is being sought to take down structurally flawed, but magnificent Trinity United Methodist Church in York. Join this Exchange thread on York’s varied architecture.