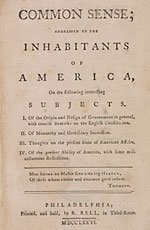 Thomas Paine’s ‘Common Sense’ is on a Library of Congress list of ‘Books that Shaped America.’ Well, some of them aren’t the best books ever written, but some of them are, the LOC’s website says. This list comes out as part of the multi-year ‘Celebration of the Book.’ York countians have the opportunity this weekend to celebrate books – thousands of them, at York Hospital Auxiliary’s annual Book Nook. Also of interest: Check out yorktownsquare.com posts on books and reading and Michael Helfrich writes scholarly piece about the Cookes House.

Thomas Paine had finished ‘Common Sense’ by the time he arrived in York in 1778.

But he worked at his ‘Crisis’ series here, laboring it is believed at Cookes House, standing today along the banks of the Codorus Creek in York.

“Published anonymously in Philadelphia in January 1776, ‘Common Sense’ appeared at a time when both separation from Great Britain and reconciliation were being considered. Through simple rational arguments, Thomas Paine focused blame for Colonial America’s troubles on the British king and pointed out the advantages of independence. This popular pamphlet had more than a half-million copies in 25 editions appearing throughout the Colonies within its first year of printing.”

I’m laboring on Modern Library’s top 100 books from the 20th Century. Maybe in about 10 years, I’ll start on this ‘Books that Shaped America.’ Check out: So, you want to become a journalist or a historian? Are you a reader?

Church members: Catholic and certain historic Protestant churches are losing membership in York County, but some houses of worship are gaining. Check out John Hilton’s story on ydr.com.

Those old camps: Camp El-Wa-Ho is over in Adams County, but no doubt some readers spent time in this Girl Scout camp. The camp was closed but will not go away. The Mormon Church has purchased it and sent campers there this week.

Blog post of the day: Over at Buffy’s World, Buffy Andrews used a special search feature called Geofeedia to capture photos embedded with tweets from visitors to the Gettysburg National Military Park. She didn’t have to leave the YDR office to find these photos.

Sandusky forum: Exchangers are commenting on the results of the Jerry Sandusky trial (guilty on 45 of 48 counts). For a summary of this case, in which there truly are no winners, check out: Sandusky summary.