Lottery tickets are going fast today in the runup to the $500 million Powerball drawing tonight for a record jackpot. York, Pa., has a place in national lottery history. The first drawing of a national lottery to raise funds for the American Revolution took place in York during Congress’ visit in 1777-78. The lottery served as a welcome diversion for delegates during their laborious stay in York. Their letters contain references to the lottery and questions about whether their number won. Remember that the delegates had been run out of the comforts of Philadelphia by the invading British. A lottery ticket from that era is pictured above. The lottery – the Pennsylvania Lottery – spurred York into the news in 2004. A York County woman won $60 million in a Powerball drawing: Also of interest: A York woman kept news of her $60 million Powerball ticket secret for 15 days. That winning, had it occurred in 1777-78, would have funded the entire American Revolution. Also of interest: Check out these stories and photographs about York’s role in the American Revolution.

“This courthouse had its beginnings on Aug. 19, 1749, when the Pennsylvania General Assembly passed an act naming Thomas Cox, Michael Tanner, George Swope, Nathan Hussey and John Wright, Jr. as commissioners to carry out formation of the new county of York and also “purchase land at some convenient place in the county … for purpose of erecting a courthouse… .” Center Square was selected, and by November 1753 the commissioners had raised the sum of 504 pounds, 16 shillings and five pence to erect the building with construction getting underway in early 1754.”

Twenty-three years later, some of America’s most notable men met in the courthouse to handle the affairs of state – and to play the lottery. To aid in the war effort, of course.

Forum of the day: Over at my Facebook page, folks are discussing my comment: Yorkco may be moving to Hopewell Township. Hopewellco? Let’s just hope the company doesn’t move south of the Mason-Dixon Line. That’s based on the recent story about Johnson Controls’ plans to move to Hopewell Township in southern York County. 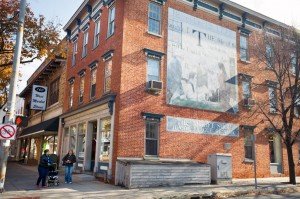 The Junior League is known for its speaker series, and the Junior League’s Thrift Store in York has now served the community for 6 decades. Have you ever shopped there or are you planning to do so this holiday season? Please comment below.