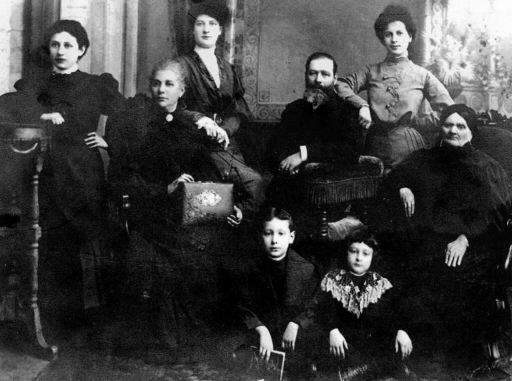 Herbert Cohen was just 5 years old in this photo, taken when his family returned to St. Petersburg, Russia, to visit family. He’s sitting on the floor, to the right, in this photo. Also in the photo are: Herbert’s grandmother, ‘Baba’ Kagen (seated at left), Herbert’s mother, Pauline Cohen (standing directly behind ‘Baba’), and Milton Cohen, 8 years old (at the feet of his grandmother.) The only other person the family can identify is Marie (on the far left), who is Pauline’s sister. Background posts: List growing of high state officials hailing from York County and Follow the Leader … George Leader.

A yorktownsquare.com commenter wondered where he could find the “Builders and Heroes” profile on the Cohen/Schepp families of York County.
A series on this blog sampled four of the families, and a list of all 50-plus “family builders” pointed to a profile on this accomplished York family, the most noteworthy member being former Pennsylvania Supreme Court Justice and Attorney General Herb Cohen… .

I fetched the story from our archives and posted it here. The complete set of profiles is available in “Builders and Heroes,” a volume in the three-volume “250th Chronicles,” available at libraries in the York County Library System.
From “Heroes and Builders:”

Jacob Schepp and his son Isaac were part of that wave. They emigrated from Russia in about 1880. Upon arrival, immigration officials requested a name. The Schepps didn’t understand. They spoke only Russian.
The immigration official tried again: “Are you a Cohen?” he asked.
“Oh, yes,” the Schepps nodded.
Unbeknownst to them at the time, the Schepps became the Cohens, some of whom eventually settled in York.
That’s one version of the story. Another has Jacob arriving in 1876 with his second son, Solomon. The name Cohen came from a prosperous traveler on the same boat.
Jacob took the name, hoping prosperity would rub off on his own family. In the second version, Jacob sends Solomon back for Isaac, who worked as a bookkeeper in a bank in St. Petersburg. Perhaps Jacob wanted Isaac for his bookkeeping expertise.
Either way, members of the Schepp- Cohen family began their lives in the New World in Baltimore before moving to Lancaster, Harrisburg and York.
Isaac returned to Russia for his bride, Pauline, in 1898. An early business venture with another family in Lancaster didn’t pan out, so they moved to York and became pawnbrokers, lending money to people who put up their worldly possessions – watches, jewelry – as collateral.
Isaac and Pauline Cohen bore two sons and a daughter. Their second son, Herbert Cohen, became the famous one. He defended John Blymire in the well-known Hex murder trial. But, more can – and has been – said of Herbert Cohen and his family.
Long before that trial, Isaac’s pawnbroker business had evolved and become a jewelry store in York. Apparently, borrowers didn’t always have the money to pay back the loans and retrieve their goods, leaving the Cohen’s with a surplus.
The Cohen Brothers (Isaac owned the business but had several brothers) had started on West Market Street and later added sporting goods to its inventory. The business moved a few more times, ending up on the second block of South George Street until the early ’60s, when it closed.
Isaac and Pauline raised three children in York: Milton, Herbert and Esther. Milton was born in Lancaster in 1898. Herbert was born in York in 1900, and Esther came along five years later.
Herbert’s son Donn Cohen, now 69, said they lived on Princess Street, near Pershing Avenue. Later, they purchased a second house on Pershing, which was Water Street at the time, before finally moving to 710 Madison Ave., where Isaac and Pauline lived until their deaths.
As a young York attorney, Herbert Cohen defended John Blymire in the 1928 Hex trial. The jury convicted Blymire of first-degree murder, and Herbert Cohen went on to become a prominent York attorney and politician. He captured the first (York city) district legislative seat and rose to the post of Democratic majority floor leader of the state House. He retained his seat for three terms, later becoming minority floor leader. He served as attorney general for Gov. George Leader from 1954 to 1956. At the time of his death, in 1970, Herbert Cohen was serving as a judge on the Pennsylvania Supreme Court.
Milton Cohen practiced medicine in York. In addition to his work as a general practitioner and dermatologist, he was active with York City’s Redevelopment Authority and served as physician for the York County Prison.
His wife, Augusta, is in her mid-80s and still lives in York. She was president of York’s Visiting Nurse Association for several years.
Esther Cohen worked as a school teacher before marrying and having children. She lived in Philadelphia.
Herbert Cohen’s daughter, Margaret “Peggy” Rubin, still lives in York and, among other things, served as president of the board of directors of Planned Parenthood of Central Pennsylvania. She continues to work with Planned Parenthood on a national level. Her husband, Harry “Bud” Rubin, continues to practice law in the York firm he started with Donn Cohen and Lavere Senft.
Herbert Cohen loved politics, Peggy Rubin said. Conversation around the Cohen dinner table ran the gamut from Mildred’s love of art to Cohen’s love of law and politics. Such discussions became more frequent when son Donn Cohen began attending the University of Pennsylvania Law School.
Donn Cohen retired from his firm in 1997. Throughout his career, he served on the boards of York Hospital, York College and United Way. He continues to teach and consult.
Between teaching stints at the University of London, he worked in Armenia and Georgia, both former republics of the Soviet Union. In Georgia he worked with the government and non-governmental organizations, trying to persuade legislators to adopt laws sensitive to human rights. In Armenia, he assisted government officials and law school administrators who are in the midst of adjusting laws for that country’s move from a communist system to a free enterprise system. He helped establish Armenia’s bar association.
In January, Cohen moves even closer to his family’s roots. He has been asked to assist the Lithuanian government in its move to a free enterprise economy. He and his wife, Janet, will spend five months in Lithuania, a stone’s throw from St. Petersburg, the same city Isaac Schepp left more than 100 years ago.
Talk about coming full circle.
Sources: Interview with Donn Cohen and Peggy Rubin; newspaper articles.