Codorus Township, in southwestern York County, actually sits out in the Sticks 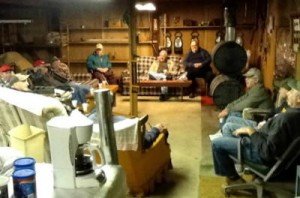 Each Wednesday, Earl Thoman’s woodworking shop in Codorus Township serves as a place to solve the world’s problems. York, Pa., Daily Record/Sunday News reporter Lauren Boyer recently caught up with this gathering of men, who were enjoying coffee and cookies around a wood stove, a double barrel woodstove at that. Also of interest:”Codorus collector exhibits collection of conveyances – wheels and sleighs.”

Earl Thoman: “I look forward to this every week. This is a regular Wednesday meeting if the snow isn’t too deep.”

“By the time I got to Shaffers Church Road, the sparse signs of civilization began to speak for themselves.

“Not even a gas station.

“It’s a dying species of Americana with a 91-year-old’s woodworking shop nestled in the middle. And it didn’t look like much – Earl Thoman’s white and green shed at the corner of Cherry Run Road surrounded by cars and pickups parked in the grass.”

About Codorus Township: It’s a farming community whose base stands on the Mason-Dixon Line. The incorporated borough most associated with the township is Jefferson, whose post office, indeed, takes on the Codorus name.

Founding: “The Gazeteer of York and Adams” places a question mark next to its 1747 founding date. What is more certain is the moment North Codorus separated from its mother: Jan. 6, 1838. The Codoruses then were know as North and South Codorus, but the ” south” didn’t stick.

Historian George Prowell’s assessment: “Many of the early settlers of this region belonged to the Lutheran and Reformed churches and emigrated to this township, directly from Germany.”

Codorus Township, or rather a Codorus Township church, made the news recently. The Stone Church is no longer a union church, that once-prevalent practice of Lutheran and German Reformed congregations jointly owning and separately worshiping in the same building: “End of union gives St. Jacobs Lutheran Church new home, room to grow.”