Famous York County cockpit painting might not be about cockfighting 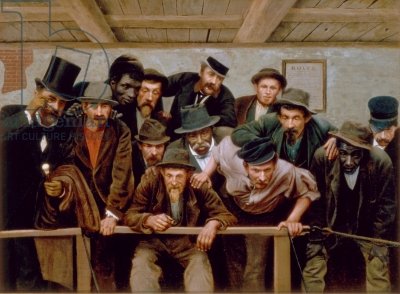 York, Pa., artist Horace Bonham, 1835-1892, was one of 19th-century York’s best known personalities. Today, his best-known painting is “Nearing the Issue at the Cockpit.” Background posts: A short test of your York black history knowledge – Part II, Exhibit captures decades-long flow of wide Susquehanna and Artist Jeff Koons came back to York for a show.

The Philadelphia Eagles’ signing of quarterback Michael Vick of dogfighting ring infamy shows the disgrace of such a crime in the 21st century.
But it’s interesting that animal-fighting did not hold such ignominy 150 years ago… .

Indeed, a York countian, Horace Bonham, painted a scene at a cockfight that is part of the Corcoran Gallery’s holdings in Washington, D.C. The same scene is part of the York County Heritage Trust collection.
Perhaps that’s because Bonham’s 1870 work may not really be about a cockfight.
For possible interpretations about the painting, click here.