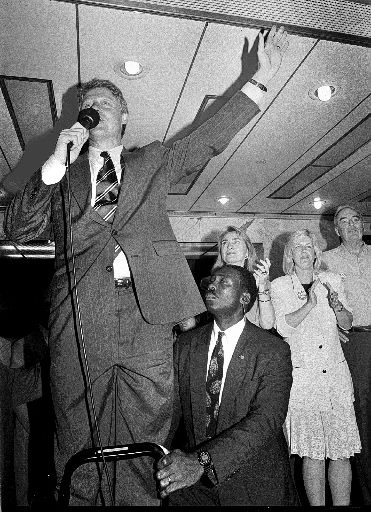 Bill Clinton speaks in front of the Yorktowne Hotel, with security guards holding the ladder and Hillary Clinton and Tipper Gore in the background. Bill Clinton and Al Gore visited York as the first overnight stop on a 1,000-mile bus trip after winning their party’s nomination at the Democratic National Convention in New York. Background posts: Presidential visit No. 2: Clinton hugs Harley, Hillary Clinton’s rally site in York, Pa. a bit odd and What did Tiny Tim and Richard Nixon have in common?.

If Democratic presidential candidate Hillary Clinton comes to York County, she’ll revive local memories of her first visit to the county.
Hillary Clinton and Tipper Gore accompanied their husbands, Dem nominees Bill Clinton and Al Gore, on a 1,000-mile bus trip after winning their party’s nod in July 1992.
Their stay at the Yorktowne Hotel was their first overnighter in their planned campaign journey from New York to St. Louis.
Reaching the Yorktowne, the entourage was welcomed by 3,000 people… .

Clinton spoke from an improvised platform – a stepladder in front of the Yorktowne.
Newspaper reports said he stumped for votes from supporters of Ross Perot, who had dropped out of the presidential race.
Clinton covered wide-ranging issues – health care reform, student aid and national service, high technology training and jobs and environmental protection.
Clinton and Gore each spoke for about 10 minutes.
Hillary Clinton and Tipper Gore visited Central Market the next morning before the group left to stump at the All-American Truck Stop in Carlisle.
In a recent stop in Harrisburg, Hillary Clinton told local Dems that she remembered her stay in York in 1992, particularly the Central Market and the Yorktowne Hotel.
“It’s nice that someone would remember every place they stop,” York County Democratic Chairman Mike Johnson said. “Or maybe we’re particularly memorable. I don’t know.”
Read about Bill Clinton’s memories of the York visit at: President Buchanan’s fall reflected his presidency.
For scores of other posts on other presidential visits, see this blog’s Presidential stops category.