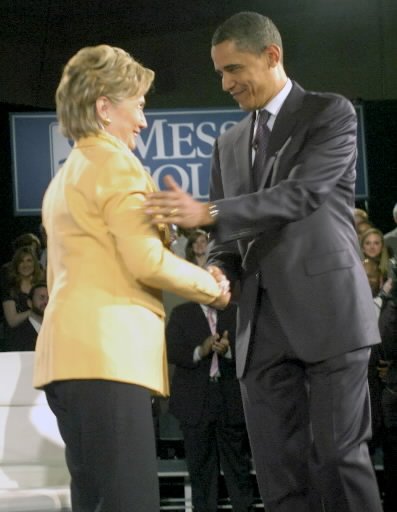 The two presidential candidates meet at Messiah College, only a few hundred feet from York County. At least two bridges connect York and Cumberland counties on the Messiah campus, a relocated covered bridge (the last of its kind in York County) and a pedestrian bridge, successor to a swinging bridge. Background posts: Picturesque steel bridges going way of covered predecessors and When the bridge over the Codorus moved.

When Democratic presidential hopefuls Hillary Clinton and Barack Obama spoke at Messiah College Sunday night, I wondered if they would unwittingly bring their campaigns to York County.
All it would have taken was for either candidate to walk across the covered bridge connecting the Cumberland County part of the campus to the York County part… . 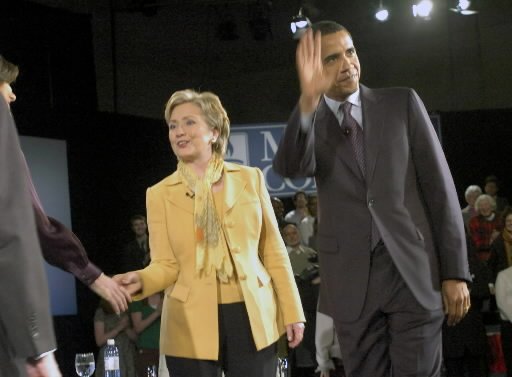 Hillary Clinton and Barack Obama greet the Messiah College audience.
Or imagine the photo-op of the candidates walking across the swinging bridge a little farther downstream. (Imagine how nervous their Secret Service escorts would have been to see their candidate warily walking across the narrow bridge.)
On the York County part of the Messiah campus, championship soccer teams have played. Nationally known speakers have sent graduates on their way in ceremonies before audiences spread out around the soccer complex. And it was here that Monica Goodling, that key figure in the Bush administration’s controversial firing of U.S. attorneys last year, may have received her Messiah diploma in the 1990s.
But as far as can be determined, neither candidate deigned to visit the county, staying indoors on the Cumberland County side instead. (To be fair, Michelle Obama and Chelsea Clinton both have visited York.)
Had they done so, they would have been within a few miles of a campaign stop George Bush I made in York County’s Monaghan Township in the early 1990s.
There, he campaigned on behalf of U.S.Sen. Arlen Specter on the estate of a big GOP fundraiser. There, he made the memorable endorsement: “This is not a normal kind of endorsement. I really mean it.”
Ah, politics.
Just wish Clinton and Obama would bring memorable quotes of their own to York County.
For posts about presidential hopefuls or presidents who did, in fact, make it to York County, see this blog’s presidential stops category.