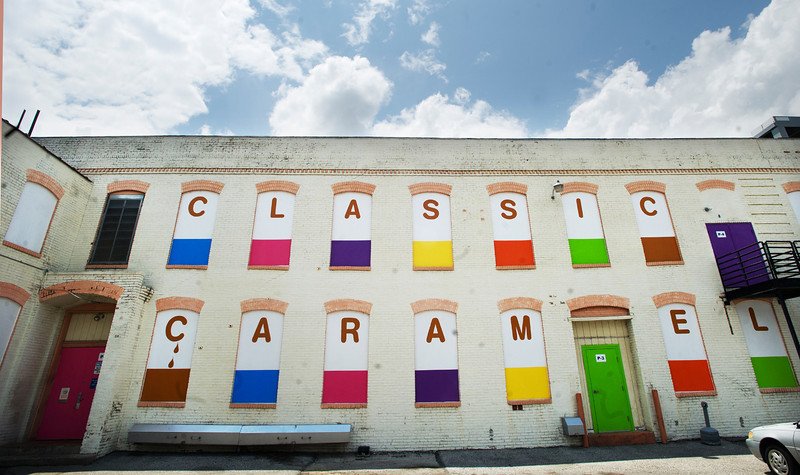 Classic Caramel and its forerunners have made candy at this quiet site near York, Pa.’s,  William Penn High School for years – make that decades. What’s new is the application of color to interior and exteriors on its West College Avenue sites. The York Daily Record/Sunday News shows this color scheme here and via a Classical Caramel Media Center gallery. ‘Inside, the building mimics a fun house – century-old brick covered in vibrant shades of yellow, blue, pink, purple, green and orange,’ says a YDR story by Lauren Boyer. The story also tells about another new thing – the company’s return to profitability. Also of interest: The Warrell Corp. also has continued another York County confectionary brand – Katharine Beecher Candies, formerly from Manchester.

The YDR story – Classic Caramel tastes profits four years after acquisition – included this CC timeline showing the company going back to before World War I.

In fact, next year, it will observe its 100th anniversary.

1941-1945: York Caramel joins the York Plan, in which York County businesses turned their operations toward the World War II effort. It produces candy for troops.

1975: York Caramel is bought by the Howard B. Stark Co. and renamed York Candy Kitchens.

1982: Robert Lukas, who joined York Candy Kitchens in 1980, buys it and renames it York Candies Inc.

1989: Company changes its name to The Classic Caramel Co.

2009: The Warrell Corp. in Camp Hill acquires the assets of The Classic Caramel Co. The company is known as The Warrell Classic Co.

A local post card collector, Michael from Harrisburg, has some questions about trolleys in York County, particularly as they related to electric parks – Cold Springs, Brookside, Highland and Forest parks in York County.

“What was the name of the trolley company?,” he wrote. “And, was there a trolley station somewhere there? Any leads to where I can find answers to these 2 questions would be great!”

I don’t know about the station at Cold Springs Park, but I’ve read accounts that the trolleys would stop at Cold Springs Park – the park sat about where the post office is located in Manchester today – and stopped again on the other side of the Conewago Creek to let swimmers out at Elm Beach. There was also a spur in Manchester that would deliver passengers to Mount Wolf.

As for the name of the company, it changed over the years but one name you can find on Google is York Railway Company.