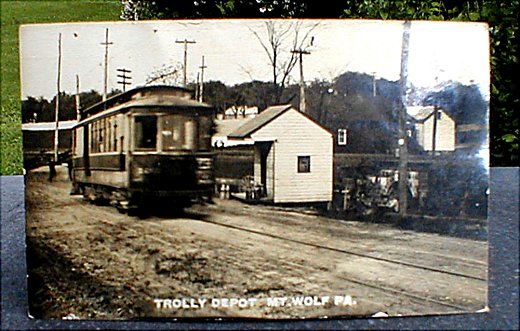 Postcards and souvenir photos, such as this one provided by York countian Larry Good, covered a variety of topics, even routine and everyday community sites. This is the trolley station in Mount Wolf. ‘… I don’t know what year,’ Good wrote.  Well, we can narrow that down a bit. ‘A History of Mount Wolf,’ states: ‘The York Haven Street Railway, which served Mount Wolf from 1903 to 1937, is remembered as a landmark of a small-town America before the automobile. ‘ The depot stood next to the Maple Street bridge near the Pennsylvania Railroad (originally Northern Central Railway) crossing. Where did the riders go? Here’s one destination: Swimming at Elm Beach. Also of interest: Trolley ran both ways between Manchester and Mount Wolf.

He recently went through some scrapbooks and came across a tribute to whistlemaster Karl Alex Smyser.

“I was delighted to find, among my own ancient history, the enclosed copy of a story that made note of the originator of the steam whistle … Karl Alex Smyser. In more recent decades his name was lost in the ‘whistle’ stories,” he wrote.

A photograph accompanied the newspaper story about the Karl Alex Smyser Banjo Band in 1931.

“Smyser was an elite musician, composer, arranger and the originator of the Christmas carols on the New York Wire Cloth Steam Whistle,” the story said.

It’s no doubt important to remember Smyser, particularly with the transition of the whistle to air power and a fund to ensure its performance into the foreseeable future.

So let’s give “old Karl-Alex” his due, Trout wrote.

For a ton of stories and photos on what is now known as the New York Wire Factory Whistle Concert, check out this blogs N.Y. Wire/Whistle category.

Another fascinating story, well, a book: Derek Sherwood has penned a book whose title explains its content: “Who Killed Betsy: Uncovering Penn State University’s Most Notorious Unsolved Crime.” Check out his website: Who killed Betsy Aardsma?

Best blog posts: Buffy Andrews, at Buffy’s World, gives the lineup of the best blog posts of the week on yorkblog.com.

Forum of the day: Joan Concilio, over at Only in York County, always has interesting stuff in her mail call. Here’s a sample that begs for your comments: Mail call: Remembering Besser’s, Bury’s and an outdoor theater.