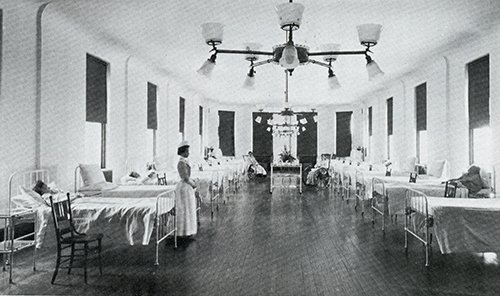 This photograph from Florence La Rose Ames’ “That Sovereign Knowledge,” shows the Women’s Ward at York Hospital around the turn of the 20th century. Parts of the hospital, then located on West College Avenue, serve as an apartment complex today. The hospital moved to its South George Street campus in 1930. Background posts: Yank mortally wounded on ninth day of service and Doctor wrote about oxygen use to aid ‘average country practitioners’ and Cemetery bears rich Civil War tales.

The U.S. Army General Hospital, the large Civil War hospital located on Penn Park, is a master’s thesis waiting to happen.
To my knowledge, no scholarly work has been written on the complex, which operated from 1862 to past war’s end. The hospital even had its own newspaper, available on microfilm, so it would be possible to pull together strands into a helpful monograph.
One intriguing piece of that research would be to connect the dots, if possible, between the military hospital and York Hospital, started in 1880.
Some links aren’t hard to find: …

The venerable Small family in York supported the military hospital – where 14,000 wounded Civil War soldiers were treated – as nurses and other roles. Samuel Small, one of the family’s patriarchs founded York Hospital in 1880 at a site near where the military hospital once stood.
Some of the physicians who worked in the military hospital served on the early staff of York Hospital, their skills honed by their military work. Dr. A.R. Blair, York Hospital’s first consulting physician, and Dr. James Kerr, first consulting surgeon, labored at the military hospital. Dr. W. S. Roland, the first president of the hospital board, undertook physicals for men entering the Union Army.
I have blogged or written columns about the military hospital on several occasions, and it was prevalent in my book, “East of Gettysburg”. But someone needs to specialize on this topic.
Perhaps the thesis could extend through the early years of York Hospital and medicine as it was practiced in York County. Powwowing, a type of faith healing, could be included.
Most intriguing would be to tell the full story of Dr. George Holtzapple, a pioneer in the use of oxygen.
Dr. Holtzapple saved the life of a 16-year-old Loganville patient, Frederick Gable, in 1885.
The young physician heated chemicals to generate oxygen that traveled through an apparatus and then was wafted toward the patient’s face. His patient lived – to the ripe age of 91. Holtzapple, meanwhile, had developed a process that would be built upon in the future, particularly for pneumonia and gas attack victims in World War I. Holtzapple went on to a long career on the hospital staff, including five years as chief of staff.
Perhaps the thesis could compare and contrast the medicine practiced by the military hospital’s chief surgeon, Henry Palmer, with that of Holtzapple, who represented the next generation of medicine.
For additional ideas about underexplored areas of York County history, click here.