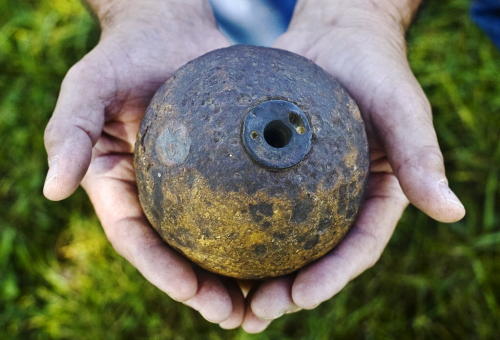 Here’s a Civil War story to remember. It involved Paul Blettner, York countian Kerry Blettner’s grandfather, who dug up the unexploded shell more than 95 years ago. The Hanover Evening Sun explains: “Paul Blettner was a young boy in 1917 when he overheard his grandfather talking about a farmer finding the shell the day after the 1863 battle and burying it in the corner of his field, next to a tree. Paul Blettner promptly went out into the nearby field, dug down about two feet and found the shell. It has been in the family ever since.” Now, the family wants to display the armed shell at part of the Battle of Hanover’s 150th anniversary next year, maybe display it alongside the Electric Map being relocated from Gettysburg to Hanover. The shell is associated with Jeb Stuart’s 2nd Stuart Horse Artillery Battery, or McGregor’s Battery, a Confederate unit that fought in Hanover. Also of interest: Check out these 10 links explaining York County’s role in blood Civil War.

Stephen Smith is exploring interesting and not-your-everyday themes over at his YorksPast blog, part of the yorkblog.com suite of community bloggers.

Check out Stephen’s: The Narrow Gauge Railroad Movement and York; Billmeyer & Small at the Forefront.

Dancing in the barn: That barn dance to raise awareness and funds for, well, barns? How did it go? Check this out: Ortanna barn dance draws crowd.

West of York County: One town thusly situated is East Berlin, right over the line in Adams County. It has all kinds of history as this story and photos explain: Preserving history the East Berlin way.

Facing death: The murderer of a Adams County wildlife officer got the death penalty, but 200 people are ahead of him on the death watch.

Forum of the day: Lorann Jacobs’ sculptures add to the streetscapes of York City. Hoping the new Creativity Unleashed tinman and other sculptures similarly represent a welcome addition. Local artists unveiled their sculptures Friday along North George Street, tying into York’s Creativity Unleashed theme. Or in some minds, will they amount to junk? Guess art is in the eye of the beholder. Please voice your views on York’s street art below.

Sign up for an upcoming ‘How to get it published’ seminar.