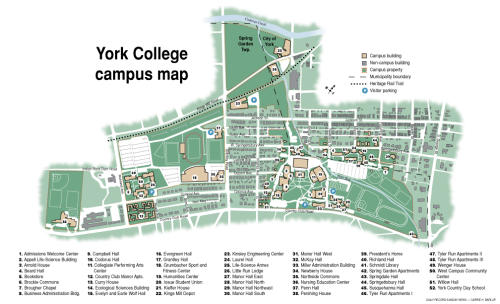 An updated version of this map of York College of Pennsylvania on its website. The campus now reaches from South George Street on the east to past Richland Avenue to the west. Also of interest: This post on the old York Academy tells about the origin of a forerunner of York College.

For years, York College of Pennsylvania has been in the news as it has grown and expanded on York’s south side.

For example, York College is looking (in 2011) to demolish six blighted buildings, with some history to them, on the campus’ north side.

The college will offer  instruction, studio space and post-graduate fellowships  in the renovated F.O.E. building, now known as Marketview Arts

I pointed out in a York Sunday News column that York College’s increased presence – along with that offered by Penn State York and HACC  in York’s downtown, is key to the city’s renaissance.

As it is, the college continues to move north – deeper into the city – with improvements to the old King’s Mill site.

I also pointed out in that column that the fact that York County did not have a four-year college until about 1970 meant that we did not benefit from the ideas and ideals that higher education can bring to a community.

That piece is a topic begging for further study: Why didn’t York County have a four-year school until about 40 years ago? And how has that growing school contributed as a community partner since it became a college?

Add that to the list of master’s theses waiting to happen.

Here’s what “Greater York in Action” says about the recently minted York College in 1968:

“With the day and evening enrollment approaching 2,000 in 1968, York College of Pennsylvania, previously a junior college, was authorized to offer baccalaureate degrees. A full range of junior year courses were planned for the fall of 1970 … .”

Working with their hands and minds, York County residents have it down to a science