Change is seen in small towns – and big – around York County, Pa. 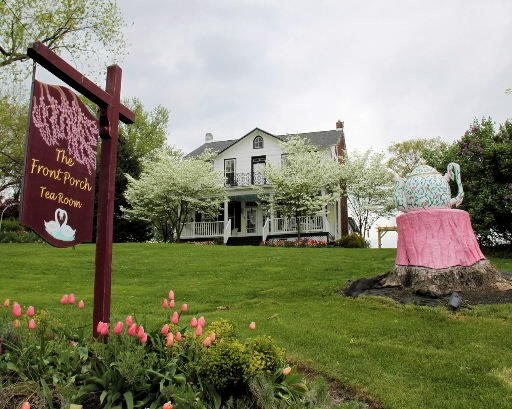 Here’s Exhibit A indicating the transition of York County, Pa., from its industrial roots to a service and information economy. In this case, the example involves a cottage industry. Or rather a business based in a large Victorian-era house. The Front Porch Tearoom in Hallam has operated there for 15 years. This village in a rural area has serviced travelers along the Lincoln Highway and rail and trolley lines. Many of those travelers were on their way to a day of factory work. Hallam also was a center for surrounding farms and other agribusinesses. Now travelers along Route 462 can – and are – stopping off at this tearoom, built by a York County sheriff in 1869. This small business in eastern York County is not to be confused with the Front Porch Cafe, another re-use of an on old house – the Frey Mansion – along Richland Avenue in York. Make the cafe Exhibit B of change in York County, Pa. A bit more about the Front Porch Tearoom below. Also of interest: Why are Hallam borough and Hellam Township spelled differently?

+++
Front Porch Tearoom: Follow the link below to a Flipside story about this example of a bustling cottage industry.

Charlie Bacas was another Gazette and Daily journalist from the 1960s. He read a recent YorkTownSquare.com post about former colleague Alfred Hopkins and his visit to the York Daily Record newsroom.

“That was the nickname some city room snark artist gave Al Hopkins in the days I shared with him on the Gazette and Daily during the Vietnam war, Civil Rights era 1964-69. He was always taking leave and popping off to South America for a few weeks from whence he’d file a story or two, usually an oped column. He was handsome, affable, fluent in Spanish, and somewhat ill suited for the numerous mundane stories that were the backbone of daily copy churned out by a newspaper that was still devoted to heavy local coverage, from the wedding notices to the school board meetings, from the fire halls to the hospital emergency rooms, and from a newspaper that lived to thunder against the decision to go to war in Vietnam on its editorial page while it published streamers of fine type bowling scores on its sports page. Al was just one of many “colorful characters” that flowed through the Gazette’s city room with each surge of the relentless historical tides that were reshaping our lives and community and were dooming the very existence of that exotic institution, JW Gitt’s fragile bastion of the fast fading form of personal journalism of wealthy, big ego and committed publishers.

+++
Commenting on FB: Check out the comments about The Gazette and Daily of the 1960s:

+++
Exhibit C: Some traditional industries have legs. News about a York, Pa., red-brick industry that has persisted for more than 100 years: