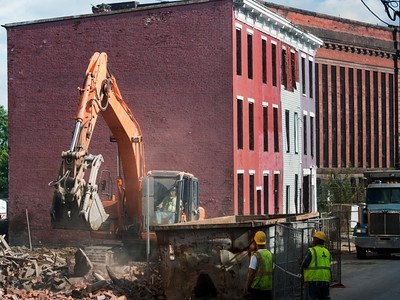 We hear from former Yorkers living elsewhere that photos of change in real time – like this one by the York, Pa., Daily Record’s Paul Kuehnel – help them keep in touch with their hometowns. Of course, this compelling photo will appeal to local residents, too, – even those who have witnessed the demolition scene. This change is coming in the 200 block of Chestnut Street in York.  Think Loud Development,  a technology company based on nearby York Street, is opening up this space for expansion. “It’s going to be a headache for existing homeowners,” a company spokesman told the York Daily Record. “But they are growing pains. When they see what we build, it will be well worth it for everyone.” Check out more photos of demolition in this neighborhood in this gallery. By the way, the old prison, not owned by Think Loud, is for sale. Also of interest: More about 210 York Street. 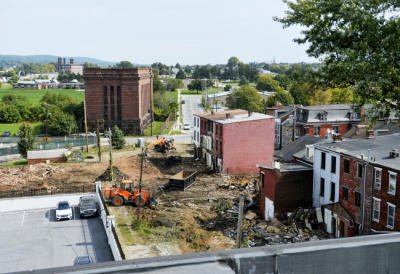 There’s a big picture theme behind these photos, too. Housing built for workers of  York’s red brick factories decades ago is coming down to make way for expansion of a 21st-century high-tech company. The workers  of old made things via an assembly line in the Industrial Revolution. Think Loud is building a network to move data in the Information Age. For more on the project, seen here from atop the Think Loud’s York Street building, check out: Gigabit initiative could spur economic growth in York.

• The Trust is looking to transform so it can thrive into the future.

Interesting piece. Check it out: New history center at Colonial Complex can be York’s next big thing 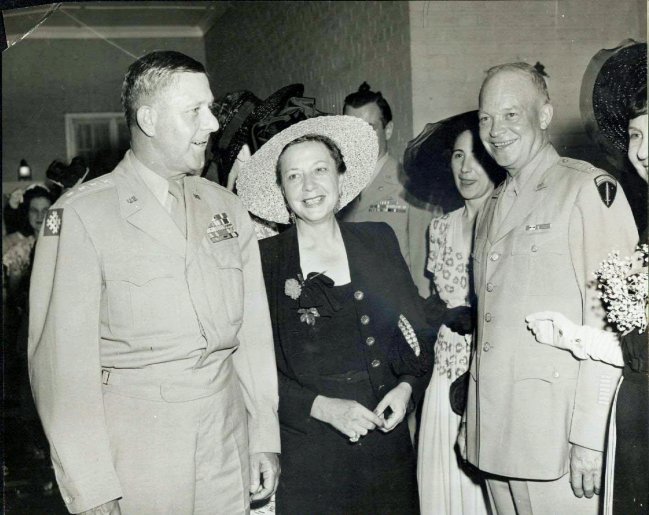 Love this image. It’s York’s Gen. Jacob L. Devers and Gen. Dwight D. Eisenhower smiling in the same photo, part of the York County Heritage Trust collection. The two World War II generals, leaders of Allied forces in World War II, didn’t get along. ‘Those officers who did not like General Devers implied he was always smirking at them. Regarding the appearance of General Devers, he did often appear to be smiling. As a cadet at West Point he even received a demerit from an instructor who thought he was smiling during drill. He had that kind of face,’ York countian Rich Robinson, an authority of Devers, wrote. An upcoming symposium will focus on the life and times of Devers.

+++
History Mystery: A scene from our past

History Mystery: This scene was played and replayed thousands of times in #YorkCountyPa history. It played out all over…