Chainsaw art rearing up all around York County, Pa. 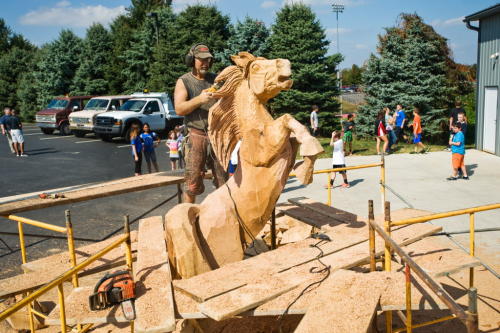 Chainsaw art is growing in popularity around York County, Pa. These former-tree-trunks-turned-into-art, like all outside art, won’t last forever. In the case of South Western High Schools ‘Mustang,’ this is the third such piece of art of an equine rearing up. Here, carver Dennis Beach works of the Hanover-area school’s new wooden mascot. It replaces a 2002 carving that succumbed to the elements. The first carving in 1985? It’s now on display inside the school, but here’s where it came from according to the Hanover Evening Sun: ‘The wood came from a tree on campus known as “the smoking tree” because of its location off school property. It served as a gathering place and message board for students. After the tree was damaged by lightning and faced with removal, the student council decided to have it carved into a mustang.’ This mascot was damaged from a 2001 tornado. Here is a Hanover Evening Sun slideshow of the carvings through the years. Also of interest: Dennis Beach also carved York, Pa.’s, Aldersgate United Methodist Church’s carving.

I’m most familiar with his art from the Susquehanna River corridor.

In fact, he discusses in the Q & A article the exhibit “Visions of the Susquehanna”:

“After much research I was thrilled to discover and bring together an amazing group of works by such prominent historic artists as Benjamin West, George Inness, Thomas Moran, Jasper Cropsey, and Charles Demuth as well as contemporary works by Mark Innerst, Debra Bermingham, Leonard Koscianski, Paul Caranicas, Randall Exon and many others. The exhibit was documented by an 80 page book and received widespread press, helping call attention to the need to preserve and protect this endangered river and its rich artistic legacy.”

Rain, rain: Today’s heavy rainfall isn’t the first nasty weather day from late summers/falls of years past. The Pumpkin Flood of 1784 was one. How many inches does it take in a day to measure up to a Tropical Storm Agnes? About 12 in one day of 15ish overall.

Every town has its history mysteries.