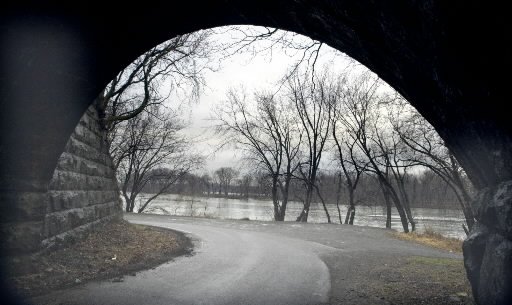 The remote place just beyond this overpass in East Manchester Township looks safe. But it isn’t. Or wasn’t. Here, William Babner attacked a young man and woman, and after he assaulted and shot them, left them for dead in the Susquehanna River. They survived, and Babner went to prison in what is, in effect, a life sentence. He would be eligible for parole if he lives to be 158 years old. ‘I’m 19 years old,” the young woman told the judge at Babner’s sentencing. ‘I’m not supposed to go through this.’ Central York High School students are studying this moment – and other violent cases – this school year. Also of interest: Check out this list of York County’s most notorious criminal cases in past 50 years.

This isn’t an exercise in solving old, cold cases. The defendants in these terrible cases have been brought to justice.

“I hope — as a journalism teacher — to help foster an interest in my students’ surroundings,” Cindy Hogentogler wrote. “Sometimes we get too fixated on the ‘here’ and ‘now’; and forget that history plays a huge role in why we live, think, and act the way we do.”

She and law teacher Erin Walker are collaborating to bring in law enforcement officers, historians, victims and others into their classrooms. A model for the project is “Serial,” a compelling NPR project that combines journalism and the law to probe a case that seems far from open-and-shut.

The classes are interested in several notorious cases from York County’s past, particularly those involving:

Hubert Michael, who killed a young York County woman in the Dillsburg area; Zachary Witman, convicted in the slaying of his brother in New Freedom; William Babner, convicted in the assault of two young people in East Manchester Township; and the two victims in the York race riots of 1969.

In a presentation to the two earlier this month, I emphasized a point that they readily understood: It’s easy to dwell on the terrible details of such cases. What is more important is to understand the long-tail impact of these violent acts on the victims, their families and the community.

Below are lightly edited responses from the two teachers and one of the students leading the project: 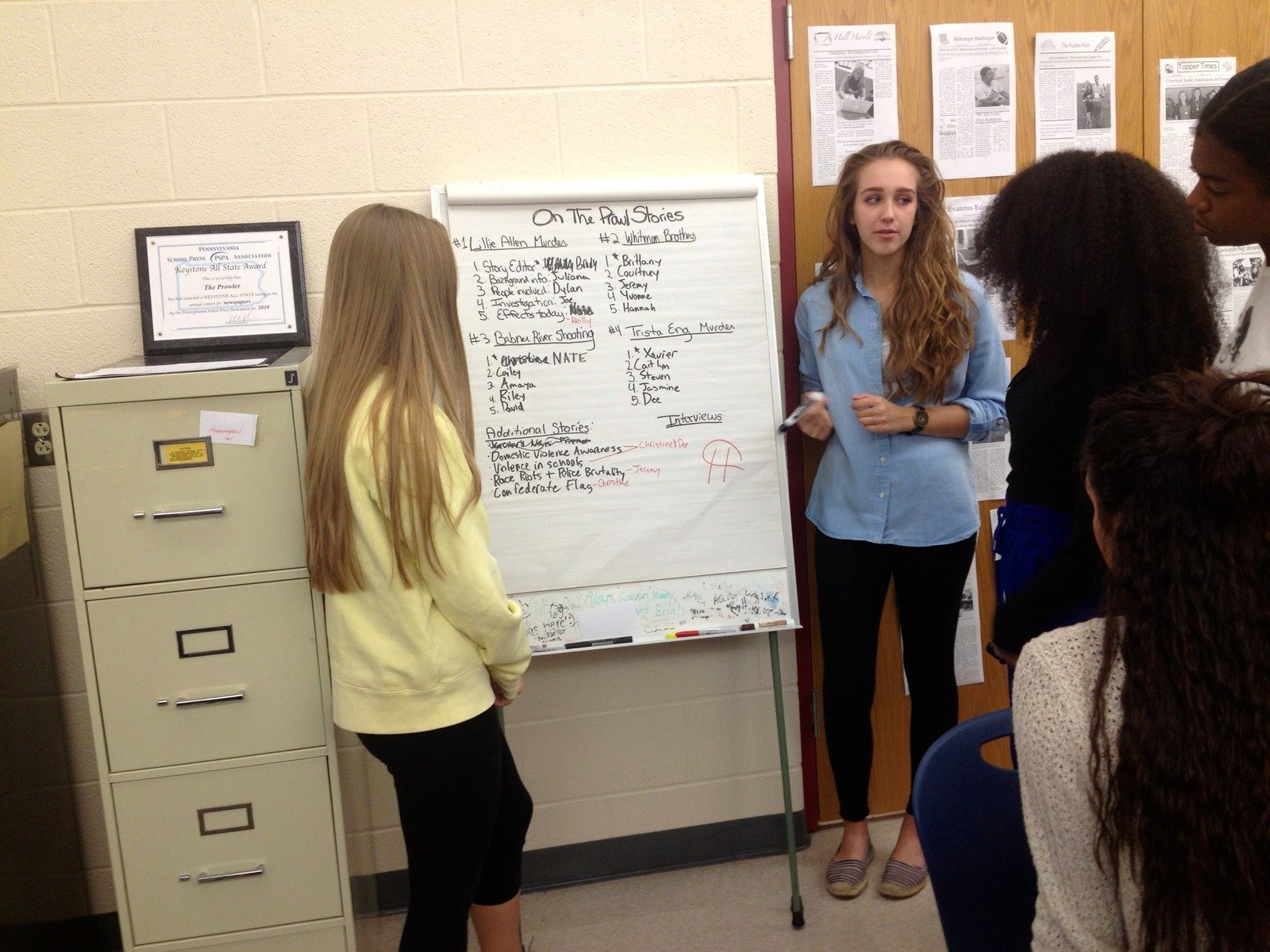 Journalism and law students get together at Central York High School this week to work on the project. 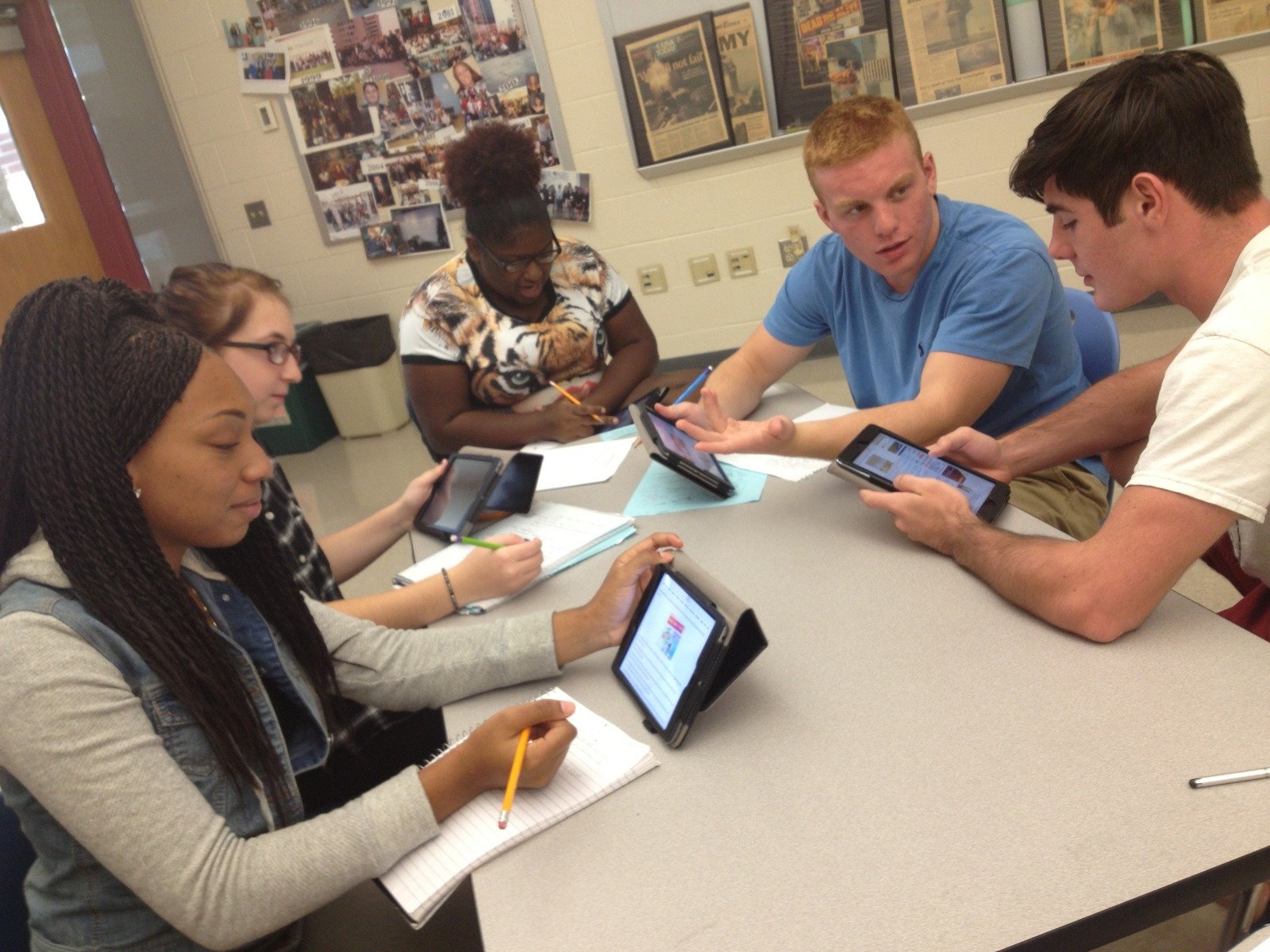 Another group of students are working on a ‘Serial’- type project.

1. Please describe the York County crimes project. How did this topic come about?

A. York County is rich in history and culture.  I hope—as a journalism teacher— to help foster an interest in my students’ surroundings. Sometimes we get too fixated on the “here” and “now” and forget that history plays a huge role in why we live, think, and act the way we do. Also, Central teachers are encouraged to collaborate with other classes to find commonality in our curriculum and to augment students’ learning. Pairing Erin Walker’s  law class with my journalism class seemed a perfect fit. Plus, the cases we selected have relevance today.

2. The cases of Hubert Michael, Zachary Witman and William Babner, plus the 1969 race riot murders, attracted the attention of the classes. Why the choice of these cases, among the many high-profile crimes in York County in the past few decades?

A. We looked at the current implications of these crimes.  Although we know there are many others, these spanned several decades, were all very different and tragic, and were all controversial.  I want my young reporters to recognize the human element in each of these cases—that although there are preconceived ideas and biases, people are at the heart of all cases. Good reporters look at all sides and seek objectivity.

3.  Sometimes, in telling the sordid stories of killers, the downstream impact on the families of their victims and their communities are overlooked. How are your storytellers addressing this?

A. Last year, my second-year journalists interviewed victims of ALS. These stories weren’t easy to hear, share or write, but that’s one of the most valuable lessons of journalism: becoming aware of human suffering and learning to record it fairly and tastefully.  We talk about sensitivity and other ethical components throughout our study of journalism. With this project, we’ll deal with each issue on a case-by-case basis. I’d like for my beginning journalists to call upon their community for help with this storytelling: professional journalists and former students who are practicing reporters, plus neighbors, family, and community acquaintances who remember the incidents. We “story map”; that is, look at all aspects and possible topics that could evolve from each story/ case.

4. What are the types of technology or platforms that you plan to use to tell these stories?

A. We’ll be using our On the Prowl Twitter  to advertise and then to get audience input.  The hardcopy paper will be designed on inDesign and printed at the York Newspaper Company. As well, we’ll post stories on our online newspaper, Prowler Online Paper called POP. The PDFs of the hardcopy papers will be available online as well.

5.  In what ways will telling these stories give insight into York County’s larger story?

A. Knowing about our past provides the backdrop for our current writing. That’s why these cases seemed the most poignant: because they all helped to  construct the York we live in today. 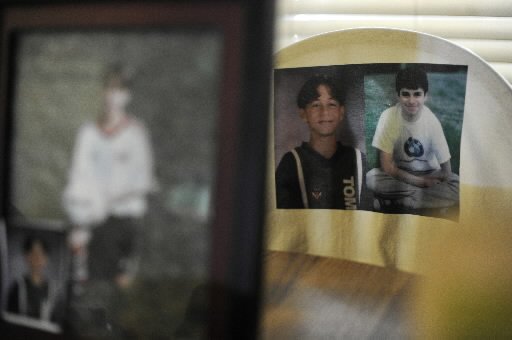 Photographs of Witman sons Gregory and Zachary sit on the kitchen table at the family’s New Freedom home. Gregory, 13, was murdered in this home. Zachary, 15, was convicted of the murder.

Sarah Crawford, Central York High School student and editor of  ‘On the Prowl’

A. For the past few years On The Prowl has been Central’s entertainment magazine. I’ve been editor-in-chief of this paper since I was a junior. Last spring, at the end of the school year, we decided that we needed to make a few changes to our publication. The magazine was geared too much toward the school’s female population and we wanted to make something that was more inclusive of everyone. The consensus was to create a new paper that would focus on hard-hitting topics. Thus, On The Prowl Investigative Journal was born.

A. This is the first time that we have ever done a collaborative newspaper project on such a grand scale. Mrs. Hogentogler presented the idea to me toward the end of the summer, and I instantly loved it. There were just so many different directions we could take the articles and the paper itself. She, and Ms. Walker, had already selected the four high-profile cases when I first learned about what we were going to do. I had previously heard of two of the cases and felt confident in their choices.

A. Students have learned, since Journalism I, how important it is to practice good ethics. Our No. 1 goal as a staff is to produce accurate and quality information. In doing this, we also want to make sure that we don’t step on any toes and offend anyone. After all, if it’s not something you’d want to read about yourself, then you shouldn’t write it. Objectivity is key. We really hope to do some personal interviews with the victims involved and make them as much a part of this process as their stories are. These families deserve to have their voices heard and we intend to do just that. Vicious crimes affect more people than it seems.

A. As editor-in-chief, one of my responsibilities is to promote upcoming editions of On The Prowl. This year, I created our very own Twitter account (@OnTheProwlNews) to better communicate with the student body. As it gets closer to our publication date, I plan on tweeting about what people can expect in the next edition and creating a lot of hype for it.

A. I believe that it’s always important to share people’s stories. York County is a big place with a lot of history that most people don’t know about. Hopefully, by writing about these four cases, it will bring out a sense of community in everyone! 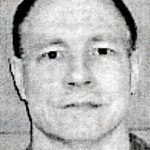 Hubert Michael, right, was convicted in the murder of Trista Eng in a remote area of northwestern York County.

A. During a professional development meeting, Mrs. Hogentogler and I were conversing about the Serial podcast series by NPR, and how it demonstrated the connection and relationship between our two classes (Journalism and Law).   We brainstormed of a way to create such a series but to maintain the York County setting to make it more relatable to our students’ lives.  I’ve done a “Crime Museum” project  with my students in the past that involved these cases and others, but I was looking to change that project, as I had begun to shift the curriculum already to a real-life applicable Student Police Partnership Program with Springettsbury Township Police Department.

A. First and foremost – the research.  In that past, I have focused on York County crimes (such as Mark Spotz, and Paul Gamboa-Taylor), but there is not much information available for students to access.  We rely heavily on the reporting of YDR and PennLive, as well as reading case files, but it became difficult to find non-repetitive information.  Also, there is a major theme or connection to current events today that each group identified –

A. The project was initially designed to contain a specific community component.  That component will gather information in an empathetic, sensitive, and understanding way.

The students are analyzing the cases with an open and unbiased mind  – which has lead to some of them questioning the justice, verdict, and/or methods of obtaining said verdict.  By connecting York County’s history to current day events (like the race riots of 1969 to the race riots of Baltimore and Ferguson).

A. We are using many apps to help create exhibits for the museum, such as one to create 3D floor plans.  In addition, students are completely creating their project and collaborating, so they are choosing the most relevant apps and collaborative programs to suit their individual needs.  So far, there are groups that made a choice, but have realized their initial choices didn’t actually suit.  Our students are very lucky to have iPads to facilitate collaboration within the groups, as well as to help them create a exceptional and unique approach to a project that goes beyond the standard or traditional format.

A. This project gives students the opportunity to interact with York County’s history, as well as to make history in their own way.  They were tasked to research a case, find a current connection/theme, design their own project that forces them to go outside of the box, and then to find community involvement to help with their research.  The students are taking ownership of the project, and through that they are questioning the past of the County (such as with the race riots), and county judicial and police decisions (Witman case).  They are also interacting daily with county resources (such as YDR), and building communication skills through contacting community members. 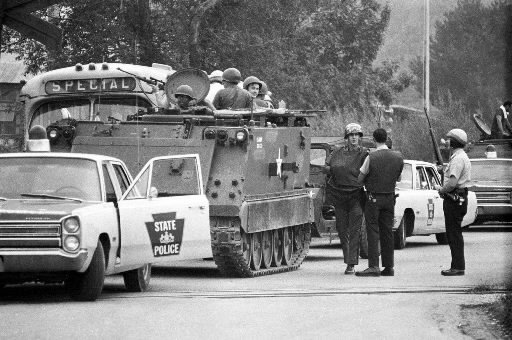 This Associated Press photo captures the terrible moment in 1969 – the York riots. Two people were killed, and their assailants weren’t brought to justice until more than 30 years later.

*All photos are from York Daily Record files unless otherwise noted.