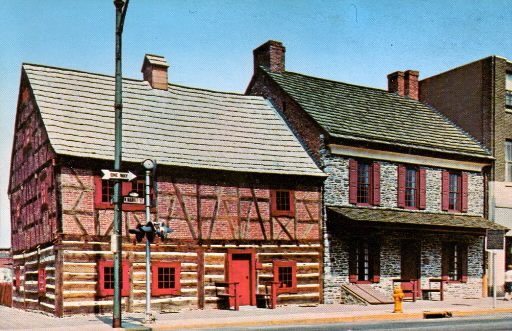 This photo was submitted by Dianne Bowders of York Township to ydr.com’s online Historic photos of York gallery. The Gates House/Plough Tavern site was a setting for recent videos produced by a Central York High School class. Dianne writes: ‘Mid 1960’s Postcard: “Gates House and Plough Tavern…York, Pennsylvania. Front view of the Golden Plough Tavern built in 1741 of medieval Germanic half-timber construction and the General Gates House built in 1751, residence of General Horatio Gates at the time York was the capital of the United States and site of the Conway Cabal, 1778.” Published by: Stel-Mar, 329 Rhoda Dr., Lancaster, Pa. Photographer: Marshall Dussinger.’ Also of interest: Look out Wikipedia, here come the Murals of York, courtesy of Roundtown Elementary third graders.

Debbie Bieber serves on the York County Heritage Trust Board and is a technology specialist in the Central York School District.

She emailed info about two videos made by Greg Wimmer’s AP US History Class at Central York High School. The class collaborated with the Heritage Trust’s Dan Roe to create videos about the Gates House and Plough Tavern and the Articles of Confederation.

“The students spent two days with Dan filming in downtown York at various locations. They also spent several days in class working on additional planning and video editing. The students set up a YouTube account to host these videos and any additional videos created for the Trust.

“The students also set up an Aurasma location based link so that people using smart phones and tablets in the vicinity of the Gates House and Plough Tavern who are running Aurasma will be able to see the videos.”

Bieber offered an assist, as did her co-worker Scott Bohlen.

And the fife & drum music in the Articles of Confederation video was performed by the Central York Middle School Fife and Drum Corps, directed by Rick Worley.

And here is a link to the video Greg Wimmer made about the making of the videos. You’ll see Director Wimmer himself on screen.

What better way to get young people involved in history than to have them make history? That is,  make videos about history.

Central York High School student history sleuths: ‘We are still unsure as to who built the home’.