Central Market should be used for all kinds of things: Linked in with neat York County history stuff, April 19, 2012 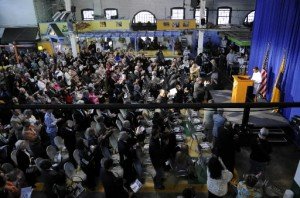 York Mayor Kim Bracey addresses a large audience in giving her State of the City Address last week. She spoke at Central Market, its food court turned into an auditorium. This isn’t the first time the late 1800s market was used as an assembly hall. (Click on image to enlarge; catch a glimpse behind the curtain below.) Also of interest: Central Market, part of the art and soul of York County, from the air.

Organizations looking for an assembly hall for medium to large events should notice York City’s use of Central Market as an auditorium.

That came last week when Mayor Kim Bracey stood on a stage in the markethouse’s food court.

History honors this use.

Central and other city markethouses served as sites for conventions and religious services.

Those assembling there will naturally draw larger audiences. People like going to market, even if it’s in the evening when the stands are closed.

But here’s another point: The stands don’t have to be closed for the evening.

Keep those stands in and around the food court open and create a place that people can go to dine – or just hang out with a cup of coffee and laptop in a third-place atmosphere, as they do a BAM, Panera Bread and other suburban sites.

Have you ever tried to find such a hangout on Saturday or Sunday afternoons downtown? So far, Central Market has missed this opportunity. Maybe Penn Street Farmers Market could steal the march on Central as a third place.

Other creative uses for our markethouses?

Like York’s Market Street? – Well so does the national magazine Travel and Leisure, placing York’s main street on a short list of the nation’s top main streets.

Forum of the day: Weigh in on the Exchange about the proposal to shut down two city middle schools bearing the names of historic figures icons: Edgar Fahs Smith and Hannah Penn.

Maybe you can help on a couple of these. 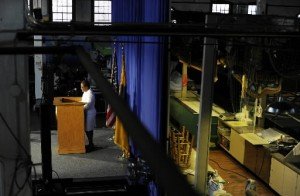