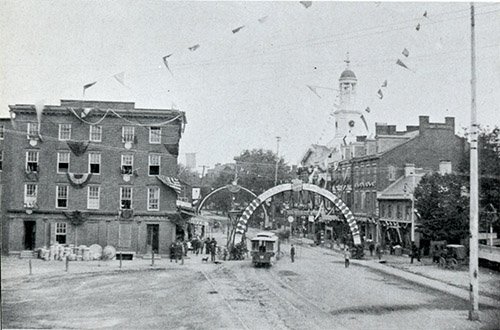 The year was 1887, and Borough of York, Pa., turned into the City of York, Pa. This came exactly 100 years after the Village of York became the Borough of York. All this called for a major celebration, and the arches in York’s Centre Square went up. Two longtime Centre Square market sheds just been torn down. Notice the flag pole that stood between those two market sheds stands here, acting as a tether for the ropes bearing banners. You can detect what looks like a former footprint of one market shed to the east of the flagpole. This is one of many celebrations of anniversaries and other moments that involved this square, now Continental Square. See: York County enjoys its big anniveraries, Part I. Also of interest: Since 1887, York mayors have dealt with the serious – and the silly.

The year was 1741, and Penn family agent Thomas Cookson was in the future village of York, Pa.

In fact, he was making the village of York, Pa., a reality by ably using his surveying equipment to lay out the area east of the Codorus Creek into squares.

He was not alone. Two local chain bearers helped him – Baltzer Spengler and Ulrich Whissler.

Those two men had traveled to Philadelphia in 1739 to meet with the Penns to set this survey plan into motion.

Cookson used the grids of Philadelphia as a model, and York’s squares came in at 480 feet wide and 520 feet long.

One estimate places the number of lots at 256, and they were populated by families whose names are familiar today (though Americanized): Croll, Eichelberger, Hoake, Crebill, Hendricks and others.

And Spengler’s and Whissler’s reward for priming all this?

They gained two choice lots, according to Jim Rudisill’s “York Since 1741.”

Now, almost 275 years later, York City plans to celebrate those days in 1741 when mostly German pioneers settled in the English village of York.

York City is setting a foundation for its big 275th birthday in 2016.

Mayor Kim Bracey, in her recent State of the City speech, said planning would begin soon.

The city has celebrated its birth before. Many people remember the 250th celebration in 1991.

The event produced a pageant – a grand play or production –  at the York Fairgrounds titled “The York Story.”

The pageant program, which doubled as an anniversary booklet, contained an engaging introduction by James R. Hartnett.

So here’s an exercise to show how an exercise – such as York City’s 275th can promote community knowledge and understanding.

I’ve broken Hartnett’s worthy intro into pieces and provide commentary to demonstrate how such anniversary moments can promote discourse, meaning and community, even 50 years later.

James Hartnett: “York is a city that is growing young. The quaint architecture of her center city, representing many bygone years, possesses  a kind of quiet, bashful beauty but it conceals many modern efficient bustling activities.

“Her roots are deep in the soil – in the Jeffersonian ideal of a agricultural self-reliance. But now the savor of the soil and that nearly-vanished way of life can only occasionally seep into her new commercial pursuits, her urban interdependence and her Hamiltonian business ideas.”

Me: At the time Harnett was writing, many landmarks buildings were coming down, often to provide parking. City retailers were losing ground to the parking-rich suburbs. The York City Market, York College Institute, York County Academy and Children’s Home of York are several examples of lost landmarks. Still, York’s streetscape today is filled with what has been called a ‘smorgasbord’ of buildings with architectural significance, an asset that we must more effectively promote.

Hartnett: “She has inherited a touch of the Southern manner from the ‘lost daughter of the Confederacy’ so close at hand, but she now reflects a tempo of life more befitting a Yankee. She has also inherited a touch of provincialism so characteristic of the United States, but her new suburban area, now almost as large as their parent city, are taking on a kind of middle-western friendliness, and her white rose symbol is now found in such distant places as Asuncion, Stockholm, and Arles.”

Me: Hartnett is pointing to York’s longtime gateway position atop the Mason-Dixon Line and within the Keystone State where North meets South. This has resulted a geographic identity crisis. This ambivalence has hurt the county, at times. For example, York has not stood firm against Southern attitudes toward race. A concrete example is York’s surrender to the invading Confederates in 1863. At the same time, York’s crossroads status and ability to easily get goods to market has long meant economic prosperity. Today, witness the rise in warehousing and distribution centers. This middle-of-everything quality is something that the community must promote.

Hartnett: “York is also going back to school. The empty little red schoolhouses in her countryside symbolize her past and they stand in sharp contrast to the rapidly growing colleges in and around her.”

Me: Hartnett rightly pointed to lessons from the one-room schools that had closed in the 1950s and the then-current growth of York Junior College. Indeed, York Junior College became York College of Pennsylvania in 1968 and its first four-year class graduated in 1972. So he was speaking of a productive, but long-overdue transition point from the day of one-room schools in which it was common not to graduate from high schools to an era that you could get a four-year college diploma on York’s own soil.

Hartnett: “York has been, for most of her years, a place of tradition, contentment and stability, but now there are deep-down stirrings within her like tiny rivulets under a winter snow, quietly bringing constant but permanent changes – new forms of life and thought.

“Once nestled in the Imperial Valley far from the tumult of major cities, York now finds herself being closed in a great urban complex stretching from Boston to Washington. She is being carried along by trends not of her making and with maybe just as little (very natural) apprehension.”

Me: Hartnett is subtly expressing concern over change, some badly needed, then underway in York County. It was the 1960s, after all. And the celebration Hartnett was participating in came at a moment of relative calm in York before the stormy rioting in 1968-69. The unrest those two summers stemmed, in part, from racism in York city’s administration and police department. So some of the challenges faced by York was of its own making.

Hartnett: But York can smile as she reaches her 225th birthday, because she knows she will always be cherished for the charm of her old age and yet she’s so lucky to be growing young again.

Me: James Hartnett gets the last word and applause for his gentle, but provocative piece.

The mayor was especially helpful in pointing us forward, noting that we can learn from the past and build upon it.

“If we take the moment and come together as a community, resolving to bring all of our citizens with us toward the future,” he wrote, “we will have truly honored those who have gone before us.”

That’s a good framework for the 275th in 2016. The event should bring York residents – and those throughout York County  –  to the future. 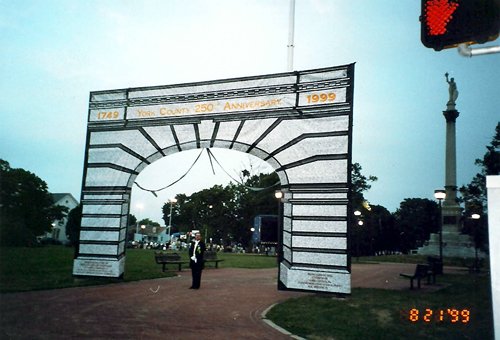 This arch was erected as part of the 250th anniversary of York County in 1999. That’s Terry Downs, designer of this structure at the soon-to-be 200-year-old Penn Park.