For a century-plus in southern York County, Catholic Valley hosted a church 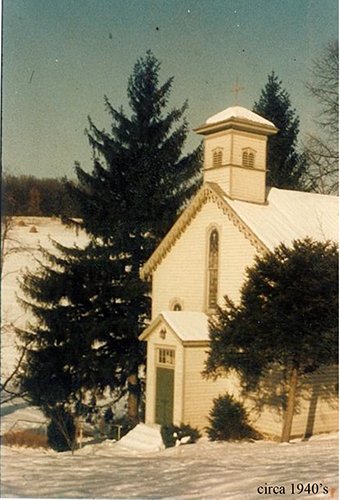 Many people are familiar with Catholic Valley Road near Larue in southern York County. But today there’s no church in that valley. The current edition of the Codorus Valley Chronicles explores the story of that building, St. Peter and Paul Catholic Church, pictured above. ‘In 1853, a group of Catholic families from Kurhessen, Germany came to Codorus Township and purchased land in a valley south of Shaffer’s Church, and the valley came to be known as Catholic Valley,’ the newsletter of the Codorus Valley History Society stated. Also of interest: Codorus Valley preservation group promotes history of other towns, too.

But there were German Catholics, too, and they worshiped at St. Peter and Paul Catholic Church. 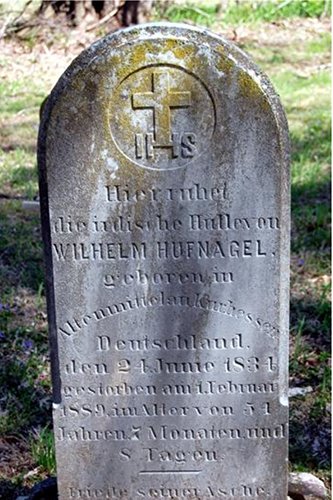 The building has been gone, but a cemetery remains. This is  William Hufnagel’s tombstone, written in German. Here’s how ‘Codorus Valley Chronicles’ describes the chapel’s demise: ‘In 1975, the Bishop of the Diocese of Harrisburg ordered Saints Peter and Paul Church razed, as it was no longer economically feasible to maintain it and today all that remains is a well-kept cemetery sheltered by ancient trees of pine and maple. Only the ancient tombstones attest to the presence of the families that settled here and built the church.’ 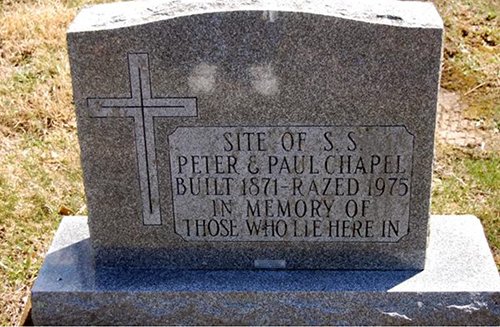 Barb Krebs, a York Daily Record correspondent, gives her memories of the Larue Valley Chapel on the Only in York County blog: ‘Catholic Valley Road in Codorus Twp, just over the hill from the Krebs Farm – my father-in-law and other locals used to call that area Catholic Kingdom – most of the residents were Pennsylvania Germans, Lutherans and not all were tolerant of ‘other’ religions. Unfortunately many of the folks I used to rely on for this kind of history are gone – but I think it may have been called the Chapel of St. Peter and St. Paul. It was a small church, really a chapel, yes there was and still is a cemetery but the church/chapel is gone. There were problems with vandalism and someone stole the copper spouting etc. I think it was part of St. John the Baptist Catholic Church in New Freedom, toward the end they may have held services there once or twice a year, eventually it the church was torn down but the stained glass windows were preserved and used when the St. John’s congregation built their new church in New Freedom.’

*These photos came from the ‘Codorus Valley Chronicles’ newsletter.