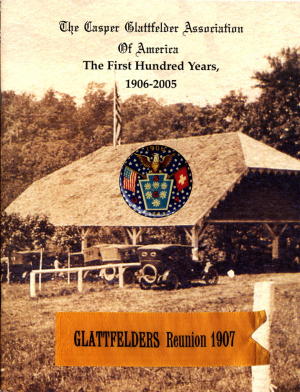 The late Charles H. Glatfelter served as his extended family’s official historian for many years. This work marked the 100th anniversary of the Casper Glattfelder Association. The family, hailing from Switzerland, first settled in York County in 1743. The association meets annually at a family park, Heimwald, ‘Home Woods.’ The book’s cover shows an early pavilion on the property near Casper Glattfelder’s original farm at Glatfelter Station, North Codorus Township. Also of interest: Art Glatfelter: Forever a hero and friend of York and Charles H. Glatfelter, distinguished historian: He would sign his kind letters ‘Charlie’.

I couldn’t let the deaths of two of the most prominent members of the Glatfelter family go by without trying to place it in York County history.

So I wrote about the late Charles and Art Glatfelter and other family members in this York Sunday News piece, The Glattfelder family has deep roots in York County:

“Casper Glattfelder and family, together with many other families and persons, immigrated to America in 1743.”

Thus began the story of the Glattfelder clan in America, as quoted in Dr. Noah M. Glatfelter’s 1901 family history.

Casper spawned a multitude of respected families radiating from his original farm in and around a future stop on the Northern Central Railway – Glatfelter Station, of course.

They live today around the world working in professions as varied as the spelling of their names: Glatfelters, Gladfelters, Glotfeltys, Clodfelters and Clotfelters, among others.

At least, the spelling of one name isn’t in dispute.

Family members seem to have settled on the spelling of Casper’s name. The family’s website is named: Casper Glattfelder Association of America and its web address: glattfelder.org.

+++
The Glatfelter name has gained the headlines in recent weeks with the deaths of two of its most distinguished members – historian Charles H. Glatfelter and insurance executive and philanthropist Art Glatfelter.

So how do you sum up the long, accomplished lives of these two men and the story of the respected family they came from?

After working through a mound of Glatfelter family material – much created by Charles Glatfelter – family members and friends will do most of the work.

First, my own written story about Art Glatfelter:

It’s a story about how he earned money hanging around his family’s auto service garage growing up in Loganville, as told in a speech about 10 years ago:

“He would drain remaining drops from discarded oil containers into a common container. Some drops here and some there, and pretty soon he had a quart of oil that he could sell at 100 percent profit.

“Years later, he built Glatfelter Insurance, in part, by taking to the road, covering fire companies and other emergency responders with insurance. One by one. Now, thousands.”

· “Builders and Heroes,” a 1999 publication, discusses the prevalence of the Glatfelter family, which still has a concentration in York County:

“When Charles H. Glatfelter set out to publish an early history of his family in America … he knew just where to go for paper: the P.H. Glatfelter Company in Spring Grove. He knew a good typesetter, too: Holly Glatfelter Burns of Lancaster.

“Keeping it in the family is a piece of cake for descendants of Casper Glattfelder … . They number in the thousands and occupy every walk of life … .”

An obituary story for Millard Gladfelter, former Temple University president, tells this story, playing on tendencies shown by some members of this Pennsylvania Dutch family: a wry sense of humor and with a touch of thriftiness thrown in:

“To mark his 25th anniversary at Temple, the public information office prepared a cake that poked gentle fun at his heritage: Pictured on the icing was the provost with his feet up on a desk and a distelfink, a mythical bird symbolic of good luck, on his shoulder. The inscription was to ‘Gladdie, who wears wonderful good after 25 years.’ He liked the cake so much, he put it in the freezer and kept it for three years. It was finally devoured at a party by his 17 nieces and nephews.”

· Noah Miller Glatfelter, writing in 1910, gave this description of the family, indicating that much of their American experience had thus far been middle class – farmers, merchants and tradesmen:

Glatfelters were “industrious, economic, honest, patriotic, peace-loving citizens; neither rich nor poor; none found in almshouses or jails; not prominent in political preferment; prolific and long-lived, numbering now many thousands. … Until in recent years they have not been found in the higher educational walks and professions, though the spirit of the present augurs a future full of promise.”

· Charles Glatfelter’s assessment, in “Builders and Heroes,” of papermaker P.H. Glatfelter’s fortunate timing in starting his Spring Grove mill in 1864:

“It could be that if events had turned differently, one would never have heard of him again. But he got into a business at the right time – at a time when the manufacture of paper was turning from rags to wood pulp as the raw material. And that brought the price of paper down and the consumption of paper way up. He was at the right place at the right time.”

· Drawing on an incident in Germany with a museum curator, Pastor Steve Herr characterized Charles Glatfelter in his funeral sermon:

“Charlie and I were looking at a map of the United States from the Colonial period when Charlie looked at the identifications on the map and quickly determined that the library’s dating of the map was incorrect. There ensued a spirited discussion between the two regarding the dating of the map first in German then English and back to German again with neither person retreating from their position. I was not worried about an escalation because Charlie was a peaceful man. Two days later when he noticed a mistake in a display at Goettingen he indicated to me that he thought he would keep his mouth shut on this occasion.”

+++
As I’ve written before, Charles Glatfelter and I would exchange correspondence on occasion.

One of his letters included a copy of the Casper Glattfelder Association centennial history, written by, yes, Charles Glatfelter.

What he said of that reunion group in his kind note is true of the family that Casper Glattfelder started: “a distinctive, even possibly unique, organization firmly rooted in York County.” 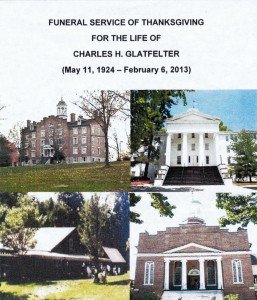 Not surprisingly and quite appropriately, the funeral service for Charles H. Glatfelter included Martin Luther’s ‘A Might Fortress.’