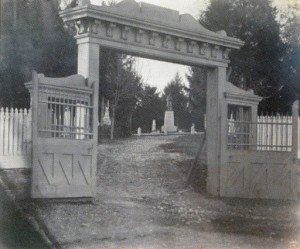 Soldiers Circle, where many Union soldiers who died at York, Pa., military hospital were buried, is seen through the gate at Prospect Hill Cemetery in this undated photograph. The U.S. Army General Hospital operated at Penn Park from 1862 to 1965. Also of interest: By this count, York County hosted 3 military prisoner-of-war camps

She presented on her work on the hospital- undertaken through the lens of its soldier-led newspaper, The Cartridge Box – to the York Civil War Roundtable this week.

That presentation came as part of 150th anniversary observances of the Civil War, whose focal point is a Civil War Road Show parked at Penn Park. The park was the site of the military hospital.

Here are a few of many intriguing points gleaned from Jean’s presentation: … .

– A type of horizontal dumbwaiter, a kind of train operated by ropes and pulleys, moved food along the long tables in the mess hall. That contraption reduced the need for servers, who were needed elsewhere in the hospital and the war.

– As an example of the fun facts revealed in the newspapers: Thanksgiving meal in 1864 included the serving of 125 turkeys, “some of huge dimensions.”

– On one occasion, Samuel Small supplied 130 quarts of blackberries.

– Native American wounded were placed in a ward – the 14th Ward. The hospital housed 14 wards in its 8 buildings and other facilities.

– The York County Heritage Trust has a full set of Cartridge Box newspapers, collected by one of the hospital’s physicians, Dr. A.R. Blair.

– The collection contains other artifacts. For example, a sign worn as punishment by one of the patients stating: “I got drunk.”