Carrie Nation in York, Pa.: ‘If you keep smoking those things …’ 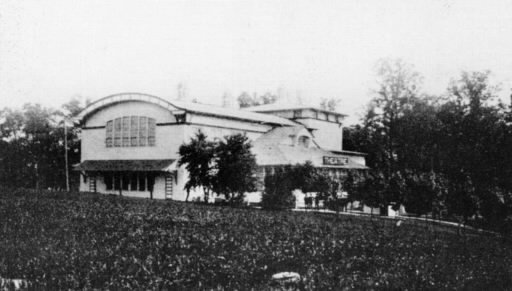 Carrie Nation visited York County for a week-long campaign against drinking and smoking in 1907. She addressed a large gathering at Highland Park in West Manchester Township. Her address might have taken place in the park theater, pictured above. The park, located at the south end of Highland Avenue, was demolished early in the 20th century. Those familiar with Dogtown, Smoketown or Highlandtown and the old Highland Park School can get a sense of the former location of the park, now covered, in part, by a quarry. Background posts: Growing off-peak trolley ridership: Build a park and Church’s story links up with U.S. religious history.

York resident F.H. Hartley recalled years after Carrie Nation’s visit to West Manchester Township’s Highland Park in 1907 that a young man stoutly stood in front of her puffing on a cigarette.
He blew smoke directly at the reformer.
At one point, she turned to him and said: “Young fellow, if you keep on smoking those things, you’ll have as little brains in your head as you have moisture now.”
Perhaps the young man’s hard-headed presence that day at Highland Park was appropriate.
The park is gone … .

“West Manchester Township, 1799-1999” told of this incident, although the ubiquitous cigars might have been the young man’s preferred smoke.
It indicated the pushback by some in the county against longtime, lucrative, home-grown cash products – beer, whiskey and cigars. Their prevalence suggests that, however many Southern tendencies the border county of York has picked up over the years, it was not part of the Bible belt.
More on Carrie Nation’s visit from “Never to be Forgotten”:

Carrie Nation, known for smashing whiskey bottles and slashing bars with her hatchet, arrives in the county to rail against the drinking of alcoholic beverages, card playing and smoking. No physical damage is reported during her week-long stay, but she took oral swipes at saloon owners in York, Wrightsville, Dallastown, Windsor, Red Lion and Dover. One Sunday afternoon, for example, the uninvited Nation attends a meeting of the local bartenders’ union in a fourth-floor room on York’s West Market Street. “I told them that they were maintaining a drunken men’s club and that it ought to be wiped out,” she later tells a newspaper. A large audience attends her last lecture at Highland Park in West York, where, in an amiable moment, she stated, “I like York especially for its laboring classes. Everybody seems to earn his bread by the sweat of his brow.” But too many York residents smoke, she said, and quite a few drink.

For other products grown or made in York County, see this blog’s Made in York category.
Photo courtesy of “West Manchester Township, 1799-1999.” 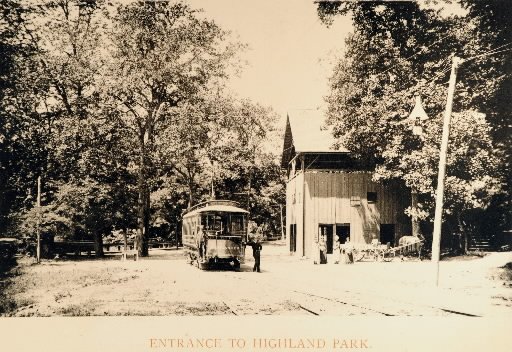 This rare photo, courtesy of the York County Heritage Trust, shows the entrance to Highland Park.