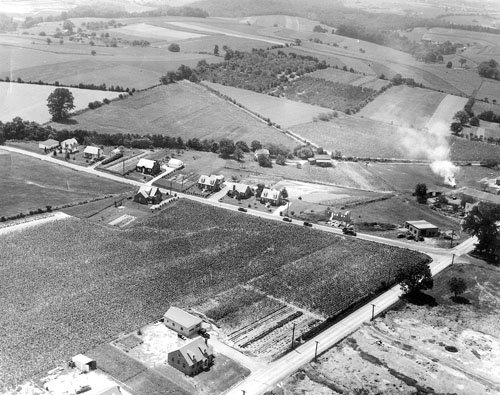 How did York County’s Cape Horn Road get its name?

Some weeks ago, Greg Moul started off a lively discussion in the Retro York Facebook Group with a query.

“When someone says Cape, you think right away of the ocean… . So, how did Cape Horn Road get its name?” Moul, a knowledgeable observer of York County’s past, wrote. “I often wondered that.”

The origin of Cape Horn, whose epicenter is the intersection of Cape Horn Road and Lombard Street, has long been an unanswered question. And 91 comments later on Retro York, we didn’t yet have an answer.

So I asked Jan Barnhart, who knows Red Lion – and, well, a whole lot of things about the county’s past.

He said he gets that question all the time.

“I haven’t locked in,” he said. “If I ever do I will put it in large print and probably take out a billboard.”

He has speculated that it came from a man who went to the Gold Rush in California after 1849 and later settled in the Cape Horn area.

Jan and I were musing about Cape Horn at the York County History Center’s archives, and he looked up newspapers.com to see how far back “Cape Horn” was in use.

He kept going back and back.

Then in 1896, there was a story in the Yoe News section of the Semi-Weekly Gazette about the wedding of Annie Taylor, youngest daughter of the late Zach Taylor. She was wedded to Eli Keener from the Dallastown area. (These popular newlyweds received a “calithumpian” serenade, the only one of 11 couples from that area to merit this boisterous Mummers-like reception since the summer of 1895.)

And there it was.

Jan could have gone back farther, but he already had 20 minutes invested in this whimsical journey.

So if anyone comes up with a solid answer to the Cape Horn naming mystery, let Jan know. He’ll need time to rent the billboard. 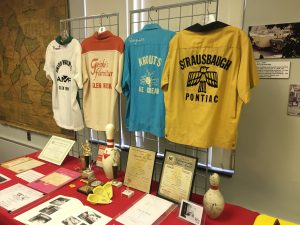 Curators at the Glen Rock Historic Preservation Society’s museum collected bowling shirts worn by local residents when two alleys operated in the borough. A recent program at the museum focused on those days when bowling leagues beckoned residents to gather. (Photo, James McClure).

Bowling alone. Not always: Glen Rock Historic Preservation Society members spent a recent meeting talking about the two bowling alleys that operated in the town from the middle part of the 20th century until 1972.

A couple of members talked about hand-setting pins in the nonautomated alley. One member bowled four nights a week.

One company – AMF – sponsored three teams, each with a different color of shirt. AMF made bakery equipment at Glen Rock plant, but its plants in York and elsewhere constructed bowling equipment.

Interestingly, AMF and AMP, maker of electronic connectors, operated plants in Glen Rock at the same time, no doubt leaving the postman in a constant state of confusion.

The presence of two alleys in such a small town points to the closeness of that community in those days.

In “Bowling Alone,” sociologist Robert Putnam pointed to the decline in bowling leagues as a sign that Americans are disengaging from their communities, losing a key element in a democracy.

Happy 150th, Manchester: Anniversary organizers for the borough recently asked me to address a Saturday morning audience as part of its 150th anniversary festivities.

The audience, fortunately, was engaged, and that small town on the Conewago Creek and astride an old road has a deep, interesting past to talk about.

And remarkably, the town’s population is growing, up about 50% since 1990.

I always like to leave an audience with some form of challenge. Manchester, I suggested, could work toward a rail trail along the old trolley right of way connecting the town with the Conewago.

Red Lion and Spring Grove are among the towns that offer trails for residents.

Playing off celebrities: Centre Presbyterian Church and the Stewartstown Area Historical Society just did something that other communities should notice.

They brought in an architect to share his expertise about an architectural firm in a building that the firm had designed. In other words, Mark Shermeyer presented about the Victorian-era’s Dempwolf architectural firm in New Park’s Centre Presbyterian Church. This reminds me of a time that the Glen Rock historians sponsored a concert in which the Brodbecks Band played the parade march pieces composed by native son Roland F. Seitz near his longtime home in that borough.

York County has produced many regionally or nationally prominent stars, and we should be more creative in bringing back our hometown heroes as role models and sources of community pride.

Delta’s deep history: When you go to Delta, you can take in Welsh quarrymen’s cottages, slate tombstones, green marble countertops, church services in Welsh, the Ma & Pa Railroad, the interesting Old Line Museum, among other things.

That museum houses a little-known, must-see artifact, left over from the bank that occupied this building for decades: Humphrey Pritchard’s 7-foot-2-inch slate clock.

The clock’s namesake was a slateworker who built the timepiece a century ago from dark slate quarried in Peach Bottom, and green and red slate from outside county boundaries.

And if tuned up, the clock tells time.

It’s built on one of the highest inhabited points in York County. Its site, Fairmount Park, was donated for public use by Catherine Meyer, who held the deed well before she and other women could  vote.

The pad is more economical to operate than a swimming pool and users face virtually no risk of drowning.

The pad draws diverse youngsters and their parents from all over. That’s noteworthy in a town whose 1930 history book boasted: “The labor in the cigar factories of Red Lion is strictly native American and all white.” In its 1980 update of that book, the “all white” was omitted from that sentence.

In York County, this splash pad, the Castle Park playground in Springettsbury Township and other playgrounds where youngsters gather are among the most integrated spots.

When you take in these sites, you’re seeing York County of the future.