Can you locate this York County airport? Linked in with neat history stuff, March 23, 2012 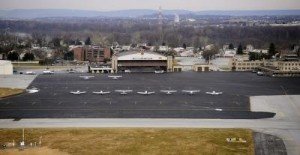 Here’s how Capital City Airport looks from the air. The governor’s plane is among the aircraft using the busy airport, sitting in York County’s northernmost tip. It’s one of 50 airports in York County’s past or present and one of its least known. The airport is the subject of the initial Exit Interviews story: Capital City Airport flies under radar off Exit 39A. The York Daily Record/Sunday News’ series explores what’s beyond the ramps, maybe a mile each way, of Interstate 83. Here’s a bit more about the airport from journalist April Trotter’s story: “Capital City is nestled among a grocery store, an Army depot, apartments and homes about a mile off I-83 Exit 39A on the northern edge of York County.” She talked with pilot Carolyn Van Newkirk: “I found myself with time – precious time,” Van Newkirk of York said about her retirement hobby. “I needed to find something else to do.” (Click on the photograph to enlarge. Follow the series on Pinterest. ) Also of interest: Check out these aerial photographs of York County and Aerial view shows great size of Central York High School or see links below.

Locally owned hardware stores in small towns have been falling prey to the Walmartization of America.

People are going to the big boxes in shopping centers rather than to privately owned stores on Main Streets.

So it comes as news that a new hardware store has opened in Spring Grove.

And there’s even more news about the Spring Grove opening of Forge Hardware. It is 75 percent owned by women , and they have females in mind when they order inventory.

New from Jonah Lehrer: Lehrer, with close relatives in and from York County, has another can’t miss best seller  – Imagine: How Creativity Works. In a blurb in the New York Times Book Review, fellow writer Malcolm Gladwell says: “Jonah Lehrer’s new book confirms what his fans have known all along—that he knows more about science than a lot of scientists and more about writing than a lot of writers.”

As I’ve written before, some of Lehrer’s considerable gray matter comes from York County.

Bermudian to be re-bridged: An 1893 bridge in Washington Township that fell from the miscue of a motorist is being replaced. Bet the new one won’t be as picturesque as the old one. See photos here.

A can’t miss read from the Hanover Evening Sun:“Roland Bohrer doesn’t create his art on a canvas. He doesn’t use clay or a musical instrument. He works with a somewhat heavier material – aluminum. Through his RB Services in Hanover, Bohrer creates everything from weather vanes and door knockers to motor shells and train-engine parts.” Check out: Preserving a dying art in Hanover

Best of blogs:  From the rock band Live Live to Peeps contest to Hunger Games to Ben and Jerry connection to York County.

Forum of the day: On the Exchange – What is your favorite flavor whoopie pie? For background on whether Maine or Pennsylvania has the best claim on this Pennsylvania Dutch delicacy, check out: Why Pennsylvania should keep its sticky fingers off whoopie pies.