Can you locate this lovely Last Supper sculpture in York? Linked in with neat York County history stuff, June 11, 2012 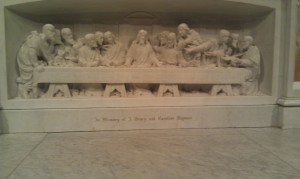 This sculpture of The Last Supper, carved out of one piece of solid marble, rests in the chancel of a York County church. Can you place this wonderful artwork? (See answer below.) Also of interest: Charles Rudy was a York County-born artist with an international reputation. (The sculptor of this artwork is unknown.)

A York County veteran is featured on the national website, American Homecomings, as he works to overcome wounds from Middle East fighting.

The headline on this York Daily Record/Sunday News story about Marine Darnell Rias: “This taught me not to complain.”

Meanwhile, the Veterans Memorial Gold Star Healing and Peace Garden in York was dedicated on Saturday.

York-High Weekly: Gordon Freireich writes about a 1928 edition of the longtime York High newspaper that serves as a type of time capsule for the school.

In search of a motel: In a recent comment on a post, Jo Ott raised put forth these memories:

“During the 1950s there  was a grocery store &amp; meat market in Shiloh (now a drycleaners) owned by the Albrights, who lived above the store.  They had one daughter.

Albrights built a motel along I83 going south of York.  It sat on the left, up on a hillside, readily visible to northbound drivers.  As I drive north somewhere in the area of Leader Heights I see several buildings that might have been that motel.”

Other info on this motel?

[brightcove video=”1183663244001″ /]
This video gives a glimpse of what the proposed excursion railroad between New Freedom and Seven Valleys could become. The Hanover Evening Sun updates the story, and the York Daily Record/Sunday News opines about the late Bill Simpson’s vision for and support of the excursion service.

Answer to question about sculpture above: This artwork is in the chancel of York’s St. Mary’s Roman Catholic Church. Church member Paul Pickler pointed out the marble piece by an unknown sculptor in giving a recent tour of the sanctuary. Paul is the unofficial or official historian of St. Mary’s and proudly pointed out its ceiling paintings of images from Mary’s life. ‘My wife and I were married in this church,’ he said. The sculpture was presented by J. Henry and Caroline Kopman.