Can you locate this beautiful, bucolic York County scene? Linked in with neat history stuff, Feb.22, 2012 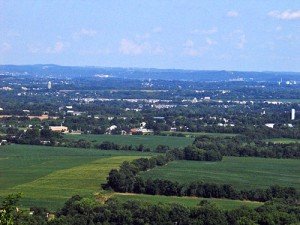 The hills in York County, Pa., offer many scenic views but here’s one that might not be as well known as say, from Roundtop Mountain Resort in northern York County or Reservoir Hill, south of York. Can you place this scene? (For answer, see below. To enlarge, click on photograph.) Also of interest: What is this odd-looking tower on banks of Bermudian Creek? and Check out this peaceful scene in York County’s remote Washington Township.

The English king’s land grant to William Penn is going to be displayed at the State Museum of Pennsylvania in Harrisburg.

A Pennsylvania Historical and Museum Commission news release said the original 1681 Penn Charter is sometimes called the state’s birth certificate. It will be exhibited March 3 through March 11.

The release states the parchment is fragile and will be  shown behind a protective shield, with low light and controlled temperature.

There is no admission charge on March 11.

Forum of the day: People are identifying road and other such problems in our Fix York County interactive blog.

The location of the scene: That’s the Codorus Creek valley from a vantage point north of Dover along Sky Top Trail. The scene overlooks Harmony Grove Road and on south into the Codorus valley, actually the valley carved by Kreutz/Codorus and Conewago creeks –  York County’s central valley. Also of interest: Here’s a photograph of another peaceful place in York County and The view from Chickie’s Rock.